Hitting at Cuban Doctors and at Human Solidarity 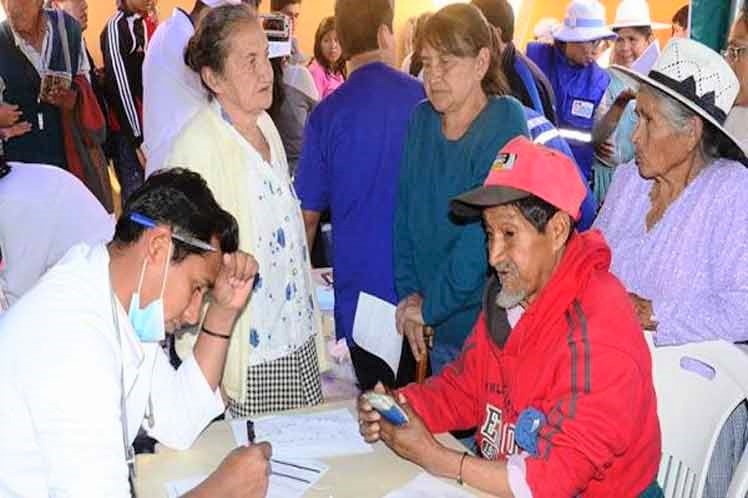 News item: Three rightwing Latin American governments have forced out Cuban doctors working in their countries. Over 8000 of them departed from Brazil in late 2018 and 382 doctors left Ecuador in mid-November, 2019. Some 700 Cuban doctors exited Bolivia after the coup there on November 10. Brazilian President Bolsonaro alleged that Cuban doctors were incompetent. In referring to money paid by Brazil for their services and retained by Cuba’s government, Bolsonaro accused the Cuban government of enslaving them. Governments in Ecuador and Bolivia claimed the Cubans doctors had supported their political opponents.

News item: Secretary of State Mike Pompeo recently applauded the interim Bolivian government’s decision to expel Cuban doctors working there. Between 1996 and 2016, the U.S. government pursued its “medical parole” program. Cuban doctors working abroad were provided with assistance encouraging them to abandon their posts and move to the United States. President Obama ended the program in January 2017. U. S. Senators Marco Rubio, Rick Scott, and Robert Menéndez demanded recently that it be restored.

U.S. interference with Cuban medical assistance to other countries is part of its long campaign – joined by rightwing allies in Latin America – to undo the Cuban Revolution. It’s reasonable to assume that in looking for targets to hit, Cuba’s enemies would select aspects of Cuba’s revolution essential to its purpose or to its survival.

Dedication to human solidarity has defined Cuba’s revolutionary movement from the start. Cuba has achieved superior indicators of health outcome at home and has responded to the health care needs of peoples abroad. These efforts, widely known and much admired, established Cuba as a model for the world in its practice of human solidarity. The doctors working abroad are highly visible agents of solidarity. They are joined by Cuban teachers, literacy specialists, sports experts, technicians, and engineers.

Cuba’s solidarity efforts, particularly medical solidarity, are unique and on that score might lead Cuba’s enemies to suppose that they contribute to the durability of the Cuban Revolution. The remedy, they perhaps reason, is to remove the doctors. After all, socialist revolutions making up the Soviet Bloc never carried out Cuba’s kind of outreach – and they disappeared.

Additionally, those benefiting from the Cuban doctors’ outreach are marginalized and working peoples. The relationship involves interaction among fellow victims of capitalist or colonialist excess. Joined together as a social class, they are, in effect, obeying the founders of scientific socialism. Workers of the world really have been uniting. Even the appearance of facilitating such a process could mean another back mark for the doctors.

The primary complaint about them, however, relates to their solidarity work itself, which is at the core of Cuba’s revolutionary purpose. Jose Marti put it there; he was “central to Cuba’s history and … the embodiment of the nation’s identity” (Granma newspaper). Cuban revolutionaries have treasured that slogan of Marti which says: “Homeland is humanity” (Patria es humanidad). The title for his speech in Tampa, Florida in 1891 was “With All and for the Good of All.” So Cuba’s adversaries are disrespecting Marti’s legacy when they meddle with the doctors.

Ernesto Che Guevara likewise elevated solidarity. He taught that individuals must participate in history, be an agent of change. But to do so they must attend to their own consciousness. The Revolution, Guevara envisioned, would be a school where students take on values, ethics, and “love.” Cubans, newly aware, would thus be motivated to act voluntarily for the common good.

The Cuban doctors symbolize important revolutionary ideals and thus are superb targets for forces already overflowing with wrath at the Cuban Revolution. In the current era of turbulence in Latin America, pretexts are readily at hand. The sheer size of that Cuban solidarity project probably alarms them too. Analyst Wilkie Delgado Correa recently offered figures that are staggering.

One U.S. purpose in harassing these Cuban doctors blends into the main rationale for the U.S. economic blockade, which is to deprive Cubans and their government of money. Some of governments hosting Cuban doctors pay for their labor with money sent to Havana. (The Cuban government pays the doctors, while retaining a good portion of the funds.) If the doctors depart, the money stops.

Very likely the doctors’ service to the Revolution as emissaries of solidarity irritates reactionaries more acutely than their role in generating money for the Cuban government. Not only do they epitomize revolutionary purpose, but they are succeeding in an area where the United States is failing. And the world is watching.

Recently an epidemiologic report established that life expectancy has been dropping for U.S. adults in their middle years. Earlier reports show that black babies in the United States die at twice the rate of white babies. All U.S. babies, taken together, are considerably more likely to die in their first year of life than Cuban babies.

What remains now is to provide some documentation relating to opinions put forth here. The excerpts appearing below, taken from two accounts, were translated by the author.

Trained as an anthropologist and originally from Peru, Varese served as representative of the United Nations High Commissioner on Refugees (UNHCR), working mostly in Ecuador.

“On May 31, 1970 an earthquake and then floods cut down the lives of more than 70,000 Peruvians in Ancash Department, Peru. In just a few days, almost hours, five field hospitals with Cuban doctors were on the ground in five provinces devastated by the earthquakes … Fidel and 150,000 Cubans donated blood to the surviving brothers and sisters of this tragedy. …

“[After the earthquake] 46 years later, in Pedernales [Ecuador], I saw the same faces, the same eyes, the same looks of appreciation for the Cuban doctors who were there doing what they could, offering care and medical attention to those who needed it. They did so with professionalism, efficiency, the right equipment, and above all with the great, caring humility that characterizes them …

“In 1988 I lived with some of my family in Puerto Cabezas, Nicaragua, where I worked as a consultant for UNHCR. The only doctors in the area were the Cuban doctors, plus a few local doctors, either African-descended or Miskito … It was the time of “low intensity warfare” and the Nicaraguan counterrevolution, and there were very few Nicaraguan doctors enthused about going into the conflict zone, but we saw the Cuban doctors working there. We were their patients too, especially after one of my sons fell gravely ill with malaria …

“In 1990 in Managua when President Violeta Chamorro was governing, my youngest son contracted a middle ear infection … It was a Cuban doctor who finally assessed him and determined that the infectious process could be turning into meningitis. He arranged for his transfer to Havana. They took care of him in the pediatric hospital there and saved his life. He was five months old and for 135 days had cried with fever and pain …

“In 1995, working with UNHCR, we were in charge of the voluntary repatriation of 12,000 Guatemalan refugees [from southern Mexico] to Quiché province in Guatemala. In the remote settlements there, the only doctors on hand were the Cubans. There was no electricity and not much potable water. The job of ACNUR was to improve the living conditions of the people returning, Because of the Cuban doctors, children, women, and men arriving in these barely accessible areas received comprehensive care … Years later I returned and still there were no Guatemalan doctors. In the villages of Quiché there were only Cubans …

“Later I worked for the United Nations in Haiti and again I found Cuban doctors working with that immense humanitarian vocation under the most difficult condition in that country. With shared dedication, they were cheerful, full of life, and ready to communicate their enthusiasm. They of course gave evidence of advanced scientific and professional training …

“During the earthquake of April 16, 2016 [in Ecuador] the first “foreigners” (if one can call them that in Our America) to arrive at the Manta airport were the Cuban doctors, and I know that because two of my sons were part of the coordination team at the airport.”

Wilkie Delgado Correa, a cardio-vascular physiologist, academician, and political writer recently surveyed Fidel Castro’s views on medical care and solidarity. The following excerpts were taken from speeches before graduating medical and dental students and at the opening of a new science center.

Cuba needs health care — On October 17, 1062, Castro pointed out that if basic health care is needed in the cities, “awareness of that need is much greater in the countryside where they never have hospitals, dentists, or doctors. The question precisely is: how do we attend to this necessity of the people? … Everything that interests the people is of fundamental concern to revolutionaries, who work for that and only that… The people quite reasonably bring up the question of medical care and health care.” Castro elsewhere mentioned that, “[A] great purpose will be fulfilled: that of passing from curative medicine to preventative medicine, that of keeping citizens from getting sick.”

Health for other peoples; it takes a revolution – In that same address, Castro says: “[W]e may even do something to help other countries, although it may be more symbolic than anything else. Let’s take the case of Algeria. Most of the doctors were French and most of them left. The health care situation there is really tragic. That’s why, talking with the students today, we told them that we need 50 voluntary doctors … to go to Algeria to help the Algerians … “

“We are certain that more will offer themselves as an expression of the spirit of solidarity of our people with peoples who are friends and who are worse off than we are. We said years, but years will pass and we can envision 40 or 50 thousand university students and young people graduating … because the revolution can do that … and it’s only a revolution that can accomplish those feats …Today we celebrate ourselves as revolutionaries. But the revolution isn’t just about coming up with ideas; it carries them out. The Revolution is not about theory. It’s about deeds above all else.”

Peoples of the world can expect solidarity — On June 18, 1965, Castro noted that, “We might limit ourselves to attending to our own necessities. But the reality of today’s world shows that ties among peoples inevitably grew stronger, especially among revolutionary peoples – and among underdeveloped peoples … Other countries besides Algeria need technically-trained people. So, how many do we prepare? We simply prepare as many as we need ourselves and as many as other fraternal peoples happen to need …”

“If it’s given to us to institute mass education and succeed in preparing masses of technical people at all levels, how are we to forget those peoples that still live in the midst of oppression, ignorance, and illiteracy? [We think about] the needs of other peoples where there are millions and the numbers of doctors among them [are few]. That’s because imperialism and colonialism, among other things, block the way to any kind of cultural and technical improvements for exploited peoples. They treat human beings like animals, as cheap labor. In no way will they be interested in developing the intelligence of those peoples.”

“That’s why when it’s a question of knowing how much of anything we need to prepare, we have only one answer: as much as possible! Everyone has needs, and if we don’t need something for ourselves, others who are needier can use it. And we have to prepare ourselves to make good on our obligations to other peoples. Otherwise, our concept of human solidarity would be framed within the minuscule sphere of our national borders and national interests.”

The Path Freely Chosen by Our People