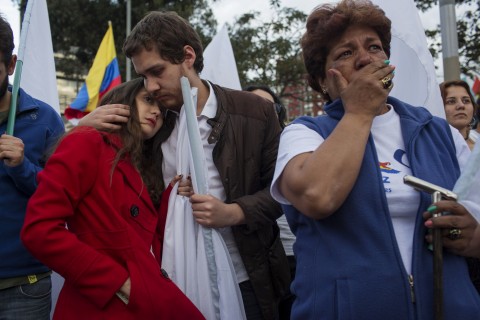 Colombians voting in a plebiscite October 2 astonishingly rejected a peace agreement, already signed, between FARC guerrillas and the Colombian government. Álvaro Uribe headed the campaign for a No vote. He is Juan Manuel Santos’ predecessor as president and consistently has opposed negotiations with the FARC. He and Santos met October 5 to discuss “adjustments and corrections to be introduced into the texts of the Havana agreement.” They were forming a “new national front,” he said.

Afterwards Uribe outlined for reporters the proposed changes he had dictated to Santos, among them prohibitions against future FARC crimes and “judicial and economic solutions” for “eliminating drug trafficking.” These should be applied “immediately lest the brazen guerrillas engage in crimes against humanity.”

Uribe doesn’t want war criminals to be judged and punished by the “Special Jurisdiction for Peace,” put forth in the agreement.  He seeks removal from the agreement of “total impunity” for FARC leaders. “[P]olitical participation by persons responsible for crimes” is off limits.  Members of the armed forces should gain judicial immunity.

Subsequently the No campaign added other demands: arms must be handed over quickly, guerrillas must clear minefields, and they must provide “real reparations” to victims. To pay for the last two, the FARC would use money gained through “illicit activities.”

Government representatives met later with leaders of Uribe’s No campaign to formulate actual changes in the agreement. They will be passed on to peace negotiators reconvened in Havana. The two sides would be forming “a political pact to save the agreement with the FARC.”

Uribe described President Santos as “willing” to make adjustments.  “A cordial atmosphere and language of respect” marked the first meeting involving both sides. It looked like the Santos government was bowing to superior force. He himself seemed to be making amends.

Santos indicated the current ceasefire would end on October 31. FARC leaders announced their troops would be moving to secure areas “to avoid provocations.” FARC leader Timoleón Jiméneztweeted that “the country is passing through a “limbo of dangerous uncertainty.” He and head FARC negotiator Iván Márquez called for “defending peace in the streets. “

Tens of thousands of Colombians – “social organizations, students, workers, and regular people” – did march October 5 in many cities. In Bogota “rivers of people” blocked the streets, mostly young people, all silent. Many carried signs saying “no more war.”

The Santos presidency is weak as it defends the peace agreement. Only 25 percent of Colombians surveyed in March, 2016 liked his presidency.  Unemployment and inflation are rising. Santos ran for re-election in 2014 on the issue of protecting the peace process. He would have lost but for leftist backing.

The government, not peace negotiators, decided upon a plebiscite. Strategists may have calculated that approval there would protect implementation of an agreement against Uribe – inspired counterattacks. Or maybe they thought use of a plebiscite for endorsing the agreement would preclude doing so through a constituent assembly, the FARC’s preference.

Actually, a plebiscite wasn’t required to validate the peace agreement, according to one legal opinion. The Colombian plebiscite apparently is the world’s only example – out of 56 – of a negotiated settlement of an armed conflict being put to a popular vote.

The face –off between Santos and Uribe reflects longstanding divisions within Colombia’s elite. Throughout the nation’s post – independence history, an upper class comprised of entrepreneurs, intellectuals, and professionals and a set of wealthy, often religiously-oriented, landowners have wrangled, even fought wars. Colombia’s conservative old guard tried to block Santos’ peace initiative from its start.

The side led by Alvaro Uribe – his landowning family is allied to paramilitaries – is having its day now. Their machinations will weaken any new peace agreement. That’s unfortunate, because the rejected accord promised an opening for peaceful political agitation against social wrongs.

There are many; 2.300 persons or groups own 53.5 percent of the country’s useful land and 2,681 Colombians possess 58.6 percent of money deposited in bank accounts.   Colombia’s income disparity is the widest in the Western Hemisphere.

Those in resistance face persecution, and of the kind that has created 9500 political prisoners in Colombia today. And violent retribution looms, as when thousands of Patriotic Union activists were murdered beginning in the mid-1980s, among them demobilized guerrillas. Paramilitary murdersand intimidation are on the rise now.

Class conflict pervades Colombian society; that’s the message here. Yet the ruling class itself is divided; hence the macabre scrambling following rejection of the agreement. The people’s movement had to choose within such a context, and so the more relaxed Santos branch of the oligarchy gained its backing in regard to peace.

Colombian academician and author Manuel Humberto Restrepo Domínguez thinks the No vote was “A massive act of sabotage.” He explains: “In the plebiscite there are signs of one more trap set by elites to reinsure power they already possess and to correct the fancies of a president departed from the right wing’s innermost heart.  He called upon his political capital to make himself independent, thinking that his upper-class status might allow that, although he knew he was on a rocky road.

And, “The elites have no shame, no regret. To the contrary, they regard weakness and longing to be occasions for attacking. They clearly are not disposed to allow spaces being opened up for real democracy. Nor do they allow others to contend for power. They are even less likely to abandon the only serious and consistent politics that unites and protects them, which is war … With their No, they have notified the national country … that they are not disposed to cede a single millimeter of what they have attained and defended with war.”