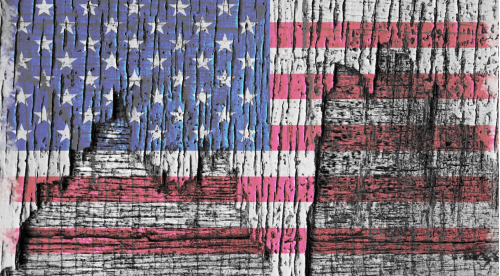 The polls closed with “no winner yet in cliffhanger presidential election,” as of Wednesday evening. Despite a period of uncertainty, which is typically the nemesis of Wall Street, the Dow climbed 0.9%, the S&P 500 opened 1.5% higher, and the Nasdaq Composite jumped 2.6%.

The explanation is that the financial elites know that they win regardless of who occupies the Oval Office, which is something that some leftists, who had advocated temporarily subordinating an independent working-class alternative to campaign for the leading neoliberal candidate, did not firmly grasp.

Trouncing the contender that Noam Chomsky hyperbolically called “worse than Hitler” would be a blow to overt white supremacy. But bedrock institutional racism, entombed in the US carceral state, will still endure and the tasks of the left will remain.

The left’s vote was not needed to ensure a Biden victory. But it was needed to justify voting for the “lesser evil” based on the false narrative of TINA – “there is no alternative.”

The Revolutionary Communist Party, normally marginalized by the corporate media, received banner headlines when it declared for Biden. The “paper of record” for the Democratic wing of the two-party duopoly, The New York Times, opportunistically posted an op-ed by a self-described socialist because it pleaded, “leftists should vote for Biden in droves.”

The Democratic Socialists of America (DSA) readily acknowledged “there is no choice at the top of the ticket that would advance our movement or constitute a ‘victory’ for democratic socialism.” But that did not deter them from jumping on the Biden bandwagon. DSA seemed more worried about Biden losing than about Sanders being excluded by the DNC.

It is not the left’s responsibility to strategize how the Democrats could have run this or future campaigns. Incidentally, a Biden/Harris victory would preclude a liberalish Democrat, such as a member of the Squad, making a run as the Democratic standard bearer for next 12 to 16 years.

The contribution of those part-time leftists who campaigned for Biden was not to put him into the White House – they didn’t have the numbers to do that – but to help legitimize neoliberal rule. Their preemptive political surrender obscured the failure of a political system incapable of addressing the critical issues of our times.

Fear was the operational motivator for apocalyptic fantasies of a fascist coup, which served to obviate a progressive agenda. A tanking economy, a still uncontained pandemic, and unprecedented protests against racialized police brutality were attributed solely to Trump’s watch, instead of being understood as also endemic to the neoliberal order.

Neither presidential candidate advocated comprehensive healthcare in a time of pandemic, with both in effect opting for triage of the most vulnerable – people of color and the elderly. The two wings of the duopoly mainly differ on this existential health issue over the advisability of wearing face masks.

Climate catastrophe remains an existential threat. Biden may throw a few more crumbs than Trump in the direction of the alternative energy industry. But both candidates contested to see who was more enthusiastic about fracking, while they agree that tax cuts and subsidies to the fossil fuel industry will be continued. Biden’s predecessor, whom he served as VP, boasted “we’ve added enough new oil and gas pipeline to circle the Earth and then some.” The next four years portends a choice of someone who denies global warming or another who believes in the science but does not act on it.

The financial elites disproportionately lavished their support on the Democrats. The oligarchs understood more clearly than certain elements of the left where their class interests reside. “Wall Street,” Politico reported, grew “giddy about Biden,” because Uncle Joe would best help recover their legitimacy while carrying their water. The financiers also hedged their bets with contributions to Trump. Along with the DNC, they understood that another four years of the current occupant would be better than a Bernie Sanders presidency for the owning class.

While the outcome of the presidential election is uncertain, the legitimacy of the ruling class has surely been sullied by the arguably ugliest campaign in recent history. The elite club must now figure out how to anoint their new emperor without further damaging their image. The hiccups over their transfer of power is their dilemma and our good fortune.

It may be too early to tell, but the widely feared Trump coup has yet to be realized. The Proud Boys, with their mail-order munitions, have yet to replace the Joint Chiefs of Staff.

Nervous leftists, apprehensive about a Trump coup, are calling upon labor to wage a general strike to install a neoliberal into the White House. Joe Hill would find that ironic at best.

While “President Donald Trump has cast doubt on whether he will commit to a peaceful transfer of power,” CNN revealed, “the secretive process to prepare a would-be Biden administration has been underway for months with help from top Trump officials (emphasis added).”

Biden may now be less unpalatable than Trump, but Uncle Joe had the advantage of not being in power for the last four years. He may not look so hot after another term of neoliberal rule, characterized by increasing austerity for working people, entrenched institutional racism, oppressive surveillance and security state measures, and an aggressive imperialism abroad. Substantial differences exist between Trump and Biden, but those differences do not extend to which class they serve.

With record turnout, never before have so many voted for so little. Now is auspicious for alternatives to the two-party duopoly.

As reported by Alan Macleod, Trump’s abysmal approval rating of 42% is barely edged out by Biden’s of 46%. Two-thirds of prospective Democratic voters polled claim they would be voting against Trump rather than for Biden; only a quarter of the prospective Republicans are voting so much for Trump as against the Democrats. Biden way squeak through on the appeal of not being Trump, but that will wear thin quickly.

With both major parties continuing to abandon the interests of working people, the left must either take the initiative or surrender it to a growing right wing. Rather than this being the time when never before has there been a greater need to support the lesser-evil Democrats and give them an extraordinary mandate to rule, this is a time to leverage the ruling class’s loss of legitimacy to articulate a left alternative.

Taking a left initiative, despite the loss of legitimacy of the ruling elites, is challenging. With a Republican victory, the left has historically gotten absorbed into a resistance that devolves into an assistance – the graveyard of social movements that is the Democratic Party. With a Democratic victory, the illusion of hope and that anyone’s better than Trump are false excuses to “give Biden a chance.” After campaigning for the Democrat, it will be problematic for these same left forces to credibly do an about-face and fight him. As for an independent electoral left, more rigorous party registration rules targeting left alternatives, recently imposed by Democrats, foreshadow fewer left choices on future ballots.

However, the majority of working people support a progressive agenda, which has been ignored and suppressed by the duopoly:

These were among the critical issues that were lost in the distracting political theatre of the 2020 campaign and the basis for a renewed left initiative. As the Midterms Approach, AIPAC Throws Its Weight – and Money – Around Washington