Almost 14 years ago, the Cuban Five Â RenÃ© GonzÃ¡lez, Gerardo HernÃ¡ndez, Antonio Guerrero, Ramon LabaÃ±ino and Fernando GonzÃ¡lez Â were falsely charged and wrongly in a Miami courtroom of "conspiracy to commit espionage" against the U.S. on behalf of the Cuban government.

Ever since the unjust conviction, the five Cubans have been held in separate U.S. prisons, often in solitary confinement.

In fact, the politically-motivated trial and conviction of the Cuban five had nothing to do with threats to U.S. security.

The Cuban Five never conspired to commit espionage. They were on a mission to monitor and report on violent groups in Miami that are well known by the U.S. government to be responsible for terrorist acts against the Cuban people.

For more than 50 years, hundreds of attacks have been launched against Cuba by these extreme right-wing groups, whose aim is the violent overthrow of the Cuban government. Their campaign of bombings, assassinations and other attacks has left 3,478 Cubans dead and 2,099 seriously injured.

The Cuban Five were peacefully trying to do what U.S. law enforcement authorities have refused to: prevent terrorism.

This horrific injustice against the Five has provoked an unprecedented campaign in the U.S., Canada and around the world to demand that their convictions be overturned and that they be granted immediate release.

As part of this international effort to achieve the freedom of the Cuban Five, a number oftrade unions and solidarity groups from across Canada, in coordination with the Canadian Network on Cuba and La Table de concertation de solidaritÃ© QuÃ©bec-Cuba, are convoking a Peoples’ Tribunal & Assembly on September 21-23, 2012 in Toronto, to shed new light on this egregious injustice and to build a broad public campaign to demand their freedom.

Â to act as a forum for education and for launching an appeal to get justice for the Cuban Five;

Â to break the silence of the mainstream media about this case; and

Â to map out the next steps of a broad and united campaign on the Cuban Five in QuÃ©bec and across the rest of Canada.

The Peoples’ Tribunal, composed of prominent Canadian and international panelists, will hear from expert witnesses before rendering a ruling. Although the Tribunal’s ruling will not be legally or judicially binding, it will carry moral force and suasion of the outrage of concerned people across Canada and internationally.

Witnesses will testify to the suffering caused to the Cuban people and to others as a result of all the terrorist attacks against Cuba and Cuban interests. They will testify to the unjust trial in Miami, the U.S. government’s covert payments to journalists covering the trial, the horrendous sentences given to the Cuban Five and the violation of international law by the United States government regarding the inhumane treatment they have endured, the denial of visitation rights to family members and the U.S. government’s harbouring and protection of self-confessed anti-Cuban terrorists.

The Peoples’ Assembly will serve to develop and adopt an extensive plan of action to pressure the Canadian government to join the international demand urging U.S. President Obama to use his authority to immediately release the Cuban Five and allow them to return to their homeland.

Participants in the Peoples’ Tribunal and Assembly on the Cuban Five are coming from the USA, the UK, Cuba, and Canada. A press conference where Tribunal participants will be present is called for Friday, September 21, 11:00 a.m., at the Metro Hall, 55 John Street (south of King), room 303.

1. Adriana PÃ©rez, wife of Gerardo Hernandez, one of the Cuban Five. Perez, who lives in Cuba, has not been allowed a U.S. visa for the last thirteen years of her husband’s imprisonment despite repeated attempts. Her husband is serving two life sentences plus fifteen years in a maximum security prison.

The most serious charge against him was conspiracy to commit murder, a charge for which there was no evidence and which the prosecuting attorney wished to withdraw for lack of evidence at his trial. The judge refused to withdraw the charges. In this most complex trial to that date in U.S. judicial history, the jury asked no questions for clarification and found all Five Defendants guilty on all counts.

2. Elizabeth Palmeiro, wife of RamÃ³n LabaÃ±ino, one of the Cuban Five. His life sentence was vacated and replaced by a sentence of thirty years. A three-judge appeals court had requested a retrial but in an unprecedented move the Prosecution asked for all the judges on the appeals court panel to review the case and 3-judge panel decision was overturned; the retrial never happened. Sentences were vacated in three of the five cases and the same judge who passed the original sentences reduced Labanino’s life sentence to thirty years in prison.

3. On October 6, 1976, the Cubana airliner of passenger flight 455 exploded from a bomb set by two persons working with Luis Posada Carriles, the mastermind of this horrendous action.

Seventy-three passengers aboard lost their lives including the gold medalists of Cuba’s fencing team that had just concluded their competition at Games in Caracas. Posada Carriles continues to live freely in Florida. A representative from the Cuban education community will speak on behalf of the relatives of the victims from that explosion, at the Tribunal and Assembly.

4. Rodolfo D’Ãvalos FernÃ¡ndez, member of the National Union of Jurists of Cuba and a renowned human rights lawyer.

5. Dr. Raymundo Navarro, member of the National Secretariat for International Relations of the Cuban Confederation of Trade Unions (CTC), a medical doctor who is also an elected deputy to the National Assembly of the People’s Power (Parliament of Cuba).

7. Other representatives from Cuba will be present. 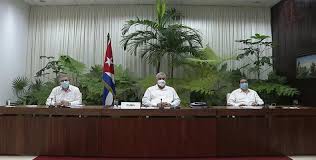