Review of “Joe Stafford: A Tale of Revolution” 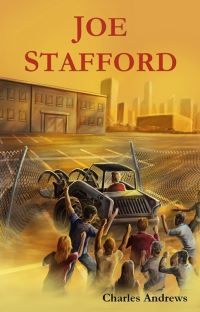 When is the last time you read an exciting story about the working class engaged in determined and successful struggle? This is just what Charles Andrews sets out to do in his newly published novelette Joe Stafford: A Tale of Revolution.

Not only is the working class largely excluded from mainstream cultural consumption for financial reasons, but it is also even more radically excluded from producing its own cultural expressions by the establishment cultural industry. Working-class writers are told that no-one wants to read about their lives, that their stories wouldn’t sell for that reason.

The reason many working-class authors take up the pen is because in the books they read they cannot find characters who share their life experience. Middle-class life dominates all the arts – people in well-paid jobs, who live in beautiful houses, are well-educated and whose children’s future is set to emulate their lifestyle. Where working-class people appear, they are drawn from a perspective that reveals prejudice and unfamiliarity with the strengths of the working class, at times with sugary sentimentality and a vague suggestion that they might escape from the working-class condition by becoming middle-class.

Working-class lives are shown as deprived, lacking refinement, with alcoholism, crime and drug abuse featuring largely. Working-class characters are hardly ever depicted in the context of their work on the shopfloor, or in situations where their strengths, creativity, skills, and intelligence might be highlighted, never in ways where it may become clear that without them, everything could come to a standstill, or that they are the preservers of humanity in a barbaric world, that they will change society for a better future. Working-class heroes are very rare indeed.

Along with the historical emergence of the working class, however, there evolved a working-class culture and artistic tradition that gave expression to the lives of the dispossessed and that has become part of the struggle for a just world. This second culture exists alongside the mainstream, yet it is rarely commented on, let alone supported or promoted. Only with the rise of the socialist countries did working-class literature, the portrayal of this class as dignified, capable of and destined to take power, become fully developed and mainstream.

Gorky was among the first who highlighted the role of growing working-class awareness and potential for revolutionary change. Many outstanding writers around the world followed in his footsteps. In the arts of the socialist world, the working class become the engineers of their present and future, they are shown in the workplace and as the shapers of their own society. These writers remain largely unknown among mainstream western readers.

Against this background, Charles Andrews’ novelette Joe Stafford: A Tale of Revolution must be welcomed. Andrews’ deep interest in social justice and the need for social change are at the heart of his two previous non-fiction works, No Rich, No Poor (2009) and The Hollow Colossus (2015). Joe Stafford: A Tale of Revolution transports the author’s insights and convictions into a fictional world, which is informed by Andrews’ own experience of trade union work. He sets his story firmly in the working-class environment – on the shopfloor, at meetings, during industrial action, at demonstrations.

Andrews commands a range of characters who reflect the diversity of the class and include communist leaders – indeed, communists are at the heart of the action, but other characters are drawn into the struggle through personal crisis. Readers witness Marxist education classes and hear about Richard Sorge and Kim Philby. Lenin is quoted for moral support, and an east German grandfather, “when there was an east Germany, you know, the socialist country”, helps out.

Perhaps at times these characters are larger than life. But why not imagine a world like this, where the working class is ready to take power? This is unheard of, indeed taboo, in mainstream literature. With a good sense for the dramatic and well-written dialogue, the working class is drawn as a dignified class, made up of class-conscious, intelligent people who are acutely aware of injustice and confront racism and exploitation. Above all, and arising from this, they are capable of liberating themselves:

But it looks like your party is getting ready to run society. You are the only ones who say workers can do it, all workers, not only the best educated.

That this doesn’t happen without resistance from and deceit by the enemy class goes without saying and is in keeping with the real world. But with undaunted optimism, Andrews’ heroes conquer their enemy. We need such optimism in these bleak times.

This review appeared in Culture Matters, a British website.

Jenny Farrell is a lecturer, writer, and an Associate Editor of Culture Matters.