No to the U.S. Intervention and Attempted Coup in Venezuela!
The following resolution was adopted by the Delegates Meeting of the San Francisco, California  Labor Council (AFL-CIO) on Monday, February 11, 2019.
Whereas, Trump administration officials have openly declared their intention to overthrow the democratically elected government of Venezuelan President Nicolás Maduro; and
Whereas, the U.S. has tightened economic sanctions, including the seizure of Venezuela’s oil properties in the United States, increasing the hardship on the people of Venezuela; and
Whereas, Venezuela has the largest oil reserves in the world, and leading Trump administration foreign policy officials have made clear their intention to privatize Venezuela’s oil and open it to exploitation by the U.S. oil companies if their coup strategy succeeds; and
Whereas, Elliott Abrams has been named Special Envoy to Venezuela and is notorious for his central role in the Iran-Contra scheme and arming of the Nicaraguan contras, the Salvadoran death squad government, and the genocidal regime in Guatemala responsible for the massacres of hundreds of thousands of indigenous people in that country; and
Whereas, the U.S. campaign of regime change in Venezuela is against the interests of the people of Venezuela, Latin America or the people of the United States; and
Whereas, the San Francisco Labor Council resolved on May 12, 2014, to “support the sovereignty of the Venezuelan people to continue their political and social process free from foreign intervention,” demanding “that the U.S. government refrain from intervention in the internal affairs of Venezuela.”
Therefore Be It Resolved, that the San Francisco Labor Council endorse and support (1) the February 23 Emergency Bay Area Hands Off Venezuela protest action; (2) the March 16 National March on the White House to say “Hands Off Venezuela, No War, No Sanctions, No Coup,” which in the Bay Area will be held on Saturday, March 9; and (3) the Hands Off Venezuela National Action, which in the Bay Area will be held on March 31.
Be It Further Resolved, that this resolution will be sent to the California Labor Federation and to Bay Area Congress members.
(adopted unanimously minus one abstention)
Respectfully submitted by
• Gloria La Riva, delegate, Pacific Media Workers Guild Local 39521
• Alan Benjamin, delegate, OPEIU Local 29
• David Welsh, delegate, NALC Branch 214 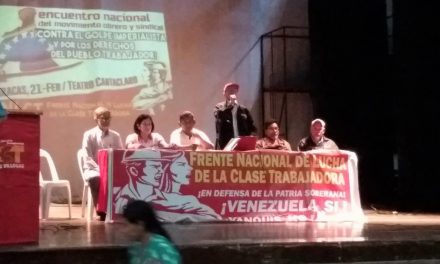