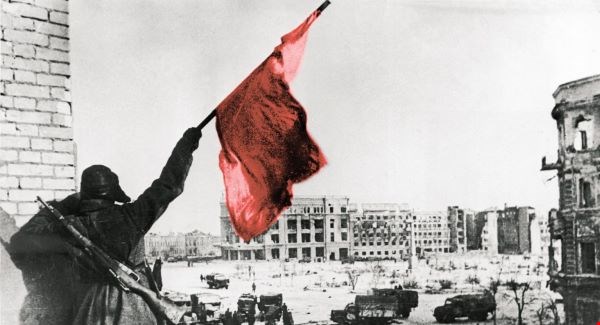 On May 3, 1945, The London Times reported on a speech in which it was claimed that a purported “iron curtain” would descend around the Union of Soviet Socialist Republics. Behind this supposed curtain, horrible atrocities would allegedly take place. This speech was made by acting Nazi Chancellor Lutz von Krosigk on May 2. Von Krosigk assumed this position following Hitler’s suicide on April 30, 1945.

At this time the Nazis were facing defeat. On May 2, the Soviet Red Army defeated the Nazi fascist warmongers in the battle for Berlin, taking the capital city at tremendous costs to both sides — an estimated 80,000 USSR soldiers lost their lives in this campaign. Nazi commander Weidling surrendered unconditionally to Commander Vasily Chuikov of the Red Army. On May 8, VE-Day, Nazi Field Marshal Keitel surrendered to Marshal Zhukov of the Red Army, and Nazi President Donitz also surrendered to the Soviets, marking the definitive end to the fascist Nazi regime. In the famous photo below, a Red Army soldier flies the hammer and sickle over the Reichstag (Nazi parliament).

Because in the West the population is taught from an impressionable age that the US defeated Nazi Germany and won World War 2 by dropping atomic bombs on Japan, it bears mentioning that this not really an accurate depiction at all. USSR was flanked by both Axis forces, forced to defend itself against Nazi Germany while simultaneously facing Japan’s encroachment on its East side. Meanwhile, the USSR had suffered under an economic blockade by the imperialist powers since 1917, and a military invasion supported by 13 Western powers as soon as World War I ended, resulting in severe damages to its economy and agricultural distribution. No country made greater sacrifices to fight the fascist scourge than USSR — the only other nation that came close was China.

Soviet troops accounted for 76% of Nazis killed during World War 2 (as reported by US conservative outlet Voice of America). In terms of sacrifices, USSR lost 7,000 times more civilian lives in World War 2 than the US, and over 20 times the amount of military personnel. In fact USSR sacrificed 10 times the amount of soldiers as US, UK, and France combined. The chart below provides a visual representation of the huge, often overlooked sacrifices that Communist USSR, and soon-to-be Communist China made to defeat the fascist scourge.

After their 1918 invasion of Russia and ensuing economic blockade failed to topple the proletarian revolution of Lenin and then Stalin, the capitalist powers hoped that the rabid anti-communist Hitler would eliminate USSR. In hopes of finally wiping the pesky anti-imperialist revolutionaries off the map, UK signed a pact with Hitler in 1935, to force the Nazis to the East. By this time Hitler had clearly laid out his plans for enslaving the Slavic people to Germany’s East and seizing their lands for German settlement in his 1924 book Mein Kampf. In short, Hitler hoped to follow the blueprint of the British and Western European genocides that led to the creation of Canada, US, Australia, New Zealand, South Africa, and so on, and permitted the great accumulation of capital on which their empires were built.

“Hitler’s concept of concentration camps as well as the practicality of genocide owed much, so he claimed, to his studies of English and United States history,” wrote Pulitzer Prize-winner John Toland in Adolf Hitler: The Definitive Biography. “He admired the camps for Boer prisoners in South Africa and for the Indians in the wild west; and often praised to his inner circle the efficiency of America’s extermination — by starvation and uneven combat — of the red savages who could not be tamed by captivity.”

“Occurring after the start of feverish rearmament and the reintroduction of the draft, the [1935] agreement raises Hitler’s hopes that they could reach a strategic understanding, with the recognition of Great Britain’s naval superiority and mutual respect between the two great “Germanic” empires: the British overseas empire and the continental German empire, which would be built through the colonization and enslavement of Eastern Europe… which gives the impression of endorsing an infamous program previously and clearly described in Mein Kampf,” wrote Domenico Losurdo.¹

The US waited patiently and only joined the war in 1941 to clean up the spoils. It should be noted that Communist USSR was ardently anti-fascist and anti-racist from day one of the Revolution, while we can hardly say the same of the British or US empires, on whose doctrines and “successes” Hitler based most of his theories.

“Social-Democracy in all countries therefore proclaims the right of nations to self-determination,” wrote Stalin in his best known book, Marxism and the National Question, published in 1913. “The right of self-determination means that only the nation itself has the right to determine its destiny, that no one has the right forcibly to interfere in the life of the nation, to destroy its schools and other institutions, to violate its habits and customs, to repress its language, or curtail its rights.”

Meanwhile, at that time in the Southern US, Blacks and Whites could not use the same washrooms or hotels. “A white woman can more freely pair-up with a dog than with a black man,” wrote the Chicago Defender in 1934, commenting on the lynchings that were still commonplace.

It’s common knowledge by now that 1,600 Nazi scientists and war criminals joined the US military-industrial complex immediately after World War 2 via the infamous Operation Paperclip program. In addition to giving jobs to Nazi war criminals in the nascent CIA, the US and their UK allies borrowed a few other tricks out of Hitler’s anti-communist playbook. The term “iron curtain” was certainly one of their most frequently employed. For his speech of 2 May, 1945, Nazi de facto Chancellor Von Krosigk actually borrowed the “iron curtain” metaphor from Joseph Goebbels, Nazi minister of propaganda, who used it in an article in May, 1943. Winston Churchill, the notorious racist who thought nothing of using chemical warfare and concentration camps to punish “recalcitrant natives” in the British colonies, used the metaphor in a March 5, 1946 speech now known as the Iron Curtain Speech. His first mention of the term, however, was just nine days after the Nazi minister’s speech was reported in the UK, in a telegram to US President Truman: “an iron curtain is drawn down upon their front,” wrote Churchill. “We do not know what is going on behind.” CIA Director Allen Dulles first used the figure of speech “iron curtain” in December, 1945, just a few months after the Nazis. Thus, Churchill, Truman, the CIA and the Nazis were allied in their fervent anti-communism, as they all evoked this mythical “iron curtain” to demonize the USSR.

In the West we often hear thoughtless comparisons between Hitler and Stalin. Nothing could be more offensive to the victims of actual intentional genocides perpetrated by imperialist and fascist scum, or to those who fought and died to defeat them in World War 2.