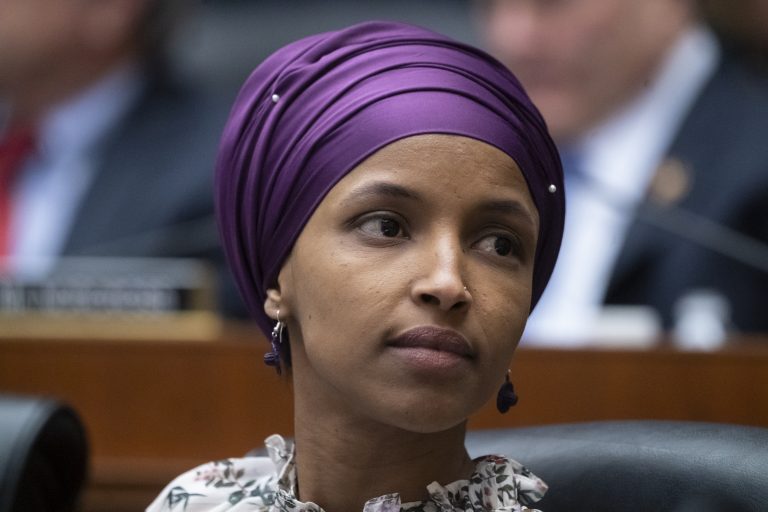 Ilhan Omar has come under renewed attack for speaking about the outsize influence of the Israel lobby, and simply for being a Black Muslim woman.

A poster that appeared in the West Virginia state capitol, for instance, implicitly blamed Omar, who came to the US as a refugee from Somalia, for the 9/11 attacks.

But instead of defending the Minnesota congresswoman, her own Democratic colleagues are piling on – continuing to falsely accuse her of anti-Semitism for legitimate comments about the Israel lobby.

“I want to talk about the political influence in this country that says it is okay for people to push for allegiance to a foreign country,” Omar said at a town hall meeting last week.

As if to prove Omar’s point, her Democratic colleague Congressman Juan Vargas declared in response that “questioning support for the US-Israel relationship is unacceptable.” In other words, Vargas – who like Omar sits on the foreign affairs committee – clearly insists on unquestioning allegiance to Israel.

And just as she did before, House Speaker Nancy Pelosi, a top Democrat who is content to use Omar in photo-ops, is leading the charge against her.

Politico reported Monday that Democratic leaders are planning to bring a resolution in the House condemning anti-Semitism.

Although the draft text does not name Omar, it is seen as a direct rebuke and public shaming.

Moreover, the draft cites the so-called IHRA definition of anti-Semitism.

That definition, promoted by the Israel lobby, deliberately conflates criticism of Israel and its racist Zionist ideology on the one hand, with hatred of Jews, on the other.

By contrast, in January, Democratic leaders moved to quash a censure vote against Steve King, a Republican lawmaker widely reviled for his racism and advocacy of white supremacism.

Taking his cue from the Democrats, President Donald Trump is amplifying the attacks on Omar and using them to partisan advantage:

Trump noted in a tweet that “Jewish groups have just sent a petition to Speaker Pelosi asking her to remove Omar from [the] Foreign Relations Committee,” adding that Omar’s comments represented a “dark day for Israel.”

This appears to be a reference to a letter signed by about a dozen extreme pro-Israel and neoconservative groups.

They include the Center for Security Policy which used to sponsor a satirical Israeli TV show that produced a cartoon depicting refugees from African states as apes.

Another signatory is an organization run by Charles Jacobs, a key player in the Islamophobia industry who has founded several anti-Palestinian groups.

Also on the list is Noah Pollak’s Committee for Israel. Pollak was recently caught in Al Jazeera’s leaked undercover documentary on the Israel lobby using paid interns to stage an anti-Palestinian protest.

The astroturfed protest was aimed at disrupting the 2016 Students for Justice in Palestine conference.

One of the groups on the letter apparently promoted by Trump is actually listed as a hate group by the Southern Poverty Law Center, an organization that monitors extremism.

According to the Southern Poverty Law Center, ACT For America, led by Brigitte Gabrielle, “is listed as an anti-Muslim hate group because it pushes wild anti-Muslim conspiracy theories, denigrates American Muslims and deliberately conflates mainstream and radical Islam.

We have come to the absurd situation where actual hate groups get to pose as anti-racists, while someone who made history as the first Black Muslim woman to enter Congress is smeared, defamed and threatened with assassination because she is prepared to stand up against a powerful lobby promoting Israel, an apartheid state.

We did not arrive at this situation just because of right-wing attacks.

Liberals, Democrats and even progressives continue to enable the attacks on Omar by playing to the lie that her truthful comments about the Israel lobby caused “hurt” by invoking “anti-Semitic tropes.”

These smear campaigns also serve another function: to suck up all the attention and energy from what is actually happening in Palestine. Last week, an independent UN commission of inquiry published its preliminary report documenting extensive evidence of Israeli war crimes and crimes against humanity during the Great March of Return protests in Gaza.

These crimes are committed with American-made weapons. Yet instead of taking this up, Congress is apparently busy with a resolution targeting Ilhan Omar.

Corbyn and Omar represent a transatlantic change of the guard, a challenge to the Israel lobby’s grip. And as we have seen, the lobby and its acolytes will not loosen that grip without an all-out, dirty fight.

In the US, Omar is the first target of this reinvigorated bipartisan assault on critics of Israel. She is unlikely to be the last.

This article first appeared in The  Electronic Intifada

Between Two Tough Battles: May 6 and June 17