Labor organizations and unions are joining with thousands of others who will be marching on Washington, D.C.,on Saturday, March 20.

The United Steelworkers (USW) are sponsoring a bus to D.C. leaving from their headquarters in downtown Pittsburgh.

Dan Kovalik, the senior associate general counsel for USW, said: "The USW will be sending a bus of protesters from its headquarters in Pittsburgh to the March 20 demonstration for peace. The time is long overdue that our nationÂs resources be spent on real health care reform, a social safety net and job creation rather than on weapons of mass destruction and senseless wars.Â We march for that change in our governmentÂs set of priorities."

United University Professions (UUP)Âthe union representing more than 34,000 academic and professional faculty on 29 State University of New York campuses and several other New York State schoolsÂpassed a resolution at its 2010 Winter Delegate Assembly calling on UUP leaders, chapters and members to build UUP participation in the March 20 demonstration in D.C. as part of the labor contingent.

In San Francisco, the March 20 demonstration will unite with the UNITE HERE Local 2 hotel workers by marching to two of the hotels being boycotted by the union. Local 2 represents more than 9,000 hotel workers who are fighting for a new contract. The Executive Board of Local 2, which has been waging a spirited contract struggle, has endorsed the March 20 demonstration. The San Francisco and Alameda County Central Labor Councils and many individual unions are mobilizing for March 20 against the wars and occupations and in solidarity with the Local 2 workers.

More information about March 20 is available at www.AnswerCoalition.org. 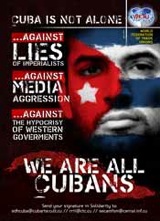 We Are All Cubans