Violence erupted today in a major labor dispute that has simmered for months at the Port of Longview, leading to work shutdowns at ports up and down the Washington coast.

Why are members of the International Longshore and Warehouse Union (ILWU) Â and their supporters in Washington and Oregon Â so upset about a grain terminal that employs just 50 workers?

Like so many corporations that promise good jobs to get what they want, EGT got a special state tax exemption and a sweetheart lease deal from the Port of Longview to build a $200 million grain terminal there. The government even seized adjacent land for the project.

But as soon as the deal’s ink was dry and the ceremonial first shovel of dirt was overturned two years ago, EGT began running the project on the cheap. Despite high unemployment in Cowlitz County and the availability of hundreds of skilled union building trades workers, EGT imported the vast majority of its construction crews from low-wage communities out-of-state and did not pay area standard wages, leading to howls from the local labor community.

After the terminal was built, EGT decided to ignore the Port of Longview’s contract with ILWU Local 21 to hire union labor on its leased site. Instead, the multinational conglomerate hired non-union workers Â claiming it would save the company $1 million a year (a figure the company later admitted had been plucked from the sky) Â and EGT sued the Port, arguing it was not bound by the contract with the ILWU. For months, ILWU picketed EGT and attempted to pressure the company to negotiate with the union.

Those protests gradually grew in size as EGT refused to meet with the union, culminating in a major rally on June 3, when more than 1,000 ILWU supporters from Washington to California rallied outside EGT’s headquarters in downtown Portland. The protest was loud, but nonviolent.Â

The dispute escalated at a July 11 protest outside the EGT terminal in Longview, when members tore down a chain-link gate and stormed the EGT grain terminal. About 100 union dock workers, including union leaders, were cited and arrested. "We are going to fight for our jobs in our jurisdiction. We have worked this dock for 70 years, and to have a big, rich corporation come in and say, ‘We don’t want you,’ is a problem," ILWU 21 President Dan Coffman told the (Longview) Daily News. "We’re all together. We’re all going to jail as a union."

On July 14, hundreds of union dock workers crowded onto railroad tracks to block a train from delivering grain to the EGT terminal. The Daily News reported that the 107-car train was rerouted to Vancouver following the standoff, which prompted Burlington Northern Santa Fe to indefinitely suspend train traffic to the grain terminal for safety reasons. "By far this is the most intense labor event that I can remember," Cowlitz County Sheriff Mark Nelson told the Daily News. But he said he understands what the union is trying to accomplish even though he didn’t agree with its tactics. "Bless their hearts. These are our neighbors, too. These are our folks. This is our community."

EGT was feeling the heat, and community support for the local ILWU workers was growing as more people learned the facts of the dispute. Then the company made a surprise announcement that it would hire a unionized subcontractor to run the terminal. EGT signed an agreement with Federal Way-based General Construction Co., a subsidiary of Kiewit, to operate the terminal with union members from the Portland-based International Union of Operating Engineers Local 701.

The Washington State Labor Council (WSLC) condemned EGT’s attempt to pit union members against each other.Â  "EGT, a Japanese multinational corporation that has received tax breaks from our state to build this grain elevator, has thumbed its nose at the members of ILWU Local 21 and is trying to pit workers against workers, local unions against local unions.

This is unacceptable," said WSLC President Jeff Johnson. "The work at the Port of Longview is longshore work and we need to come together as community and labor and say ‘no’ to EGT Â ‘you will not disrespect labor in Longview or anywhere else in our state’."

There have been numerous incidents provoked by EGT’s union-vs.-union arrangement. Most recently, a contractor drove right through the ILWU picket line on Aug. 29 and struck two ILWU members who, fortunately, were not seriously injured. Although the contractor was not cited or arrested for the vehicular assault, an angry ILWU picketer was arrested for allegedly damaging the next vehicle that attempted to cross the picket line, a charge based on video surveillance provided by an EGT security guard.

The next day, the National Labor Relations Board announced it was seeking a court order to end "aggressive picketing" at the EGT facility and allow Burlington Northern Santa Fe trains to deliver grain to the facility. Such an order was issued last week, according to Rich Ahearn, director of the NLRB’s Seattle office.

Which brings us to yesterday, Sept. 7.

Some 400 ILWU members stood on the railroad tracks to block a train from delivering grain to the terminal for about four hours, but the train passed through after protesters were confronted by 50 police officers in riot gear. ILWU President Robert McEllrath, who attended the protest, was detained by police, escalating tensions between protesters and officers. In the confrontation that ensued, police beat protesters away with clubs and pepper spray.Â Â

Ultimately, McEllrath returned to urge members to end the standoff. "You can get maced and tear-gassed and clubbed (today)" or wait for longshore support from all over the West Coast when the next train tries to enter the EGT terminal, McEllrath reportedly told protesters after he met with police. "If we leave here, it doesn’t mean that we gave up and quit. It means we’re coming back." All but 16 of the protesters returned to the union hall; the 16 who refused were arrested for trespassing.

Early this morning, hundreds of ILWU members and their supporters reportedly stormed the EGT terminal at the Port of Longview, broke down the gates, overpowered security guards, damaged railroad cars, and dumped grain, according to Longview Police Chief Jim Duscha. Initial reports indicated no one was hurt and nobody has been arrested. After a few hours, the protesters returned to their union hall.

So that’s where we stand, as of this writing. To sum up: a taxpayer-subsidized international conglomerate, which is operating on public property, is suing the public so it can avoid paying the area’s standard wages and undercut its competitors that do. Then, it exacerbated tensions with the local labor community by importing union workers from another jurisdiction to cross the picket lines.

That’s why ILWU members are angry, and that’s why this is about more than just 50 jobs in Longview. 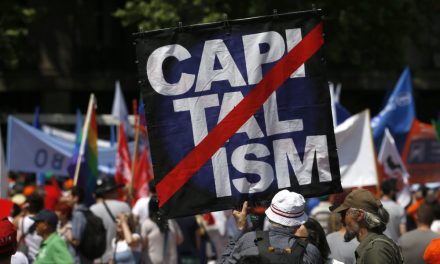