Nature once again took its toll on Haiti. On August 14, the most impoverished country in Latin America registered a 7.2 magnitude earthquake that as of the latest count has left over 2,000 people dead and 10,000 injured. The catastrophe is only exceeded to the damage left on the Haitian people by the devastating earthquake that shook the nation in 2010.

The testimonies are heartbreaking. “I saw bodies being pulled out of the rubble,” told to the press Jean Marie Simon, 38, a resident of Les Cayes, one of the most affected cities in the southern part of the country.

“The streets were filled with people searching for their loved ones. I will not forget their looks of despair, the destroyed houses around me, the bodies of young people lying on the ground,” the head of an Episcopal church in that city, Abiade Lozam, added.

But Haiti has not been alone amid this misfortune. Two hundred and fifty-three Cuban health professionals, including doctors and nurses, had been deployed in the areas most damaged by the phenomenon since long before the earthquake.

Cuba has been supporting the Haitian people since 1998, after the impact of hurricanes Mitch and George. They saved lives after the 2010 earthquake, the cholera epidemic, the 2016 cyclone Mathew, the Covid-19 pandemic, and the recent tragedy.

“Today, as it happened after every disaster situation during these last 23 years, the priority is to work tirelessly and bring medical care to all the victims,” Cuba’s Foreign Affairs Minister Bruno Rodriguez tweeted.

Our professionals will remain in that Caribbean nation for as long as the Haitian people need them. They will continue to bring health to every corner of the country, he added.

In Anse a Veau, a community of over 34,000 inhabitants about 20 kilometers from the earthquake’s epicenter, many houses collapsed, and hundreds of people were injured. From there, five Cuban specialists are working day and night to save lives.

A few seconds after the community trembled, hundreds of inhabitants crowded outside the Cuban installations. Many of them were children or people with traumas and exposed fractures. Despite the experience of Cuban doctors in dealing with natural disasters, these were painful images.

The specialists told Prensa Latina that one of the most shocking cases they received was a woman who fell backward onto a steel bar in the middle of the tremor.

“I have never experienced such a traumatic incident. The lady came to us with the section of iron still piercing her body. We contained her bleeding, cannulated the vein, and got her to a nearby hospital for surgical care, but that’s all we could do,” nurse Aliosca Asencio lamented.

The island’s specialists serve in other cities far from the capital Port-au-Prince, including Jeremie, L’Asile, Aquin, Anse a Veau, Corail, and Port Salut, which are now amidst the constant aftershocks that are rocking the south of the country.

According to local news outlets, some doctors are still sleeping in tents, like some 130,000 families who lost everything during the second most intense earthquake the country has experienced in the past 11 years.

“Our solidarity with the noble Haitian people will be eternal. We are here in body and soul for them amid these hard times, and we will be here for as long as it takes,” Asencio said. 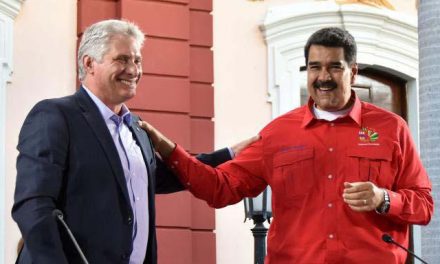