In the United States the Iraq war has “entered into perfect forgetfulness.” Argentinean political commentator Juan Gelman suggests also that U.S. leaders enjoy impunity despite lies they used to rationalize their invasion and despite the war’s civilian deaths. Impaired memory may have contributed to impunity but the public’s lack of awareness of facts surely played a role.

Recent analyses and a new way of tabulating casualties have the potential for broadening general appreciation of the human costs of the Iraq war. Beyond that, realization that crimes took place and assignment of responsibility both depend on knowing what actually happened there.

A study released on October 15 shows that the Iraqi death rate between 2003 and 2011 was 4.55 per 1,000 person-years, a figure 50 percent higher than rates for two years immediately preceding the war. That means 405,000 excess wartime deaths. As of 2005  –  2006, the risk of death had risen 70 percent for women, 290 percent for men. According to the study published by PLOSMedicine, violence accounted for 60% of excess deaths with the remainder caused by “the collapse of infrastructure and other indirect, but war-related, causes.” PLOS, publisher of the online journal, is an “organization of scientists and physicians committed to making the world’s scientific and medical literature a freely available public resource.”

In another development, Agence France-Presse (AFP) has streamlined access to mortality summaries and thereby eased the monitoring of data. An announcement explained that "AFP’s internal spreadsheet tracking daily casualties from attacks in Iraq" is open to the public. The news service expects the "incredibly time-consuming and opaque" process of verifying death reports will become obsolete. The spreadsheet for each month has links to "other sheets for violence tracking" beginning with August 2012. Government figures are available for comparison. To see the AFP spreadsheet, go tohttp://www.bit.ly/AFPIraqToll.

Knowing the extent of social disruption caused by the war is basic to understanding the U.S. role in the calamity. Social and environmental chaos set the stage for civilian deaths and suffering.

By 2007 Iraqi orphans numbered 5 million. As of March, 2013, 2.7 million Iraqis were internally displaced, 83 percent of them women and children. Also, 33 percent of women received no humanitarian assistance after 2003, 76 percent of widows receive no pension, and 55 percent of women suffered violent abuse. The U.S. invasion and occupation caused destruction of sewage treatment plants, factories, schools, hospitals and power plants. Public health infrastructure is minimal, 70 percent of Iraqis lack access to potable water, food is short for 4 million people, and sanitation is inadequate for 80 percent of Iraqis.

And sectarian civil war, fostered by a U.S. strategy of divide and rule, contributed mightily to social disintegration. Soldiers and paramilitaries killed civilians. U. S. troops and sectarian militias accounted for an equal number of violent deaths.

Evidence is strong that environmental contamination from left-over weapons and munitions endangered civilians. The debris contains depleted uranium (DU), which many think causes birth defects and cancers. Birth defects are concentrated in areas of heavy fighting, notably Fallujah and Basra. An epidemiological study released on September 11 has returned that epidemic to the news, but for perverse reasons.

Having conducted household interviews, the Iraqi Ministry of Health discovered that 21.7 infants per 1,000 births were born with congenital defects–normal findings, it was suggested. There was "no clear evidence to suggest an unusually high rate of congenital birth defects in Iraq," according to the research. The epidemic never happened.

Protests from scientists and humanitarian specialists flooded left-leaning media outlets. Some 50,000 people signed a Change.org petition calling for expert review of the study data and methods. For Neel Mani, a former WHO program director in Iraq, the study "runs counter to the consistent reports of medical professionals across Iraq." He suspects politicization of the research,"

Studies show that: from 2006 through 2009, Fallujah experienced a twelve fold rise in childhood cancer and a rise in infant mortality at least four times regional norms; in Fallujah, from 2003 through 2010, congenital malformations increased to 15% of all births; and in Basra during 10 years following the 1991 Gulf War congenital defects affecting babies born in one maternity hospital increased 17–fold. That trend continued: physicians at that hospital recently described "a 60% rise in birth defects since 2003." Researchers cast blame on depleted uranium and other metallic residues.

Britain’s Lancet medical journal questioned the report’s methodology and peer review." For Finnish environmentalist Keith Baverstock, a specialist on DU health effects, "This document is not of scientific quality. It wouldn’t pass peer reviewin one of the worst journals." "Existing medical records in Iraqi hospitals" were ignored and "interviews with mothers [were used] as a basis for diagnosis."

Former UN assistant secretary general Hans von Sponeck, formerly UN humanitarian coordinator for Iraq, indicated evidence for the "alarming rise in birth defects, leukemia, cancer and other carcinogenic diseases in Iraq [was] definitive." He suggested "someone, somewhere clumsily decided that they would not release these damning findings, but instead obscure them." Baverstock questions "the role of the US and UK, who have a conflict of interest in this sort of study due to compensation issues that might arise from findings determining a link between higher birth defects and DU."

The conclusion here is that crimes were committed and cover-up continues. After all, the Geneva Conventions require combatants to protect civilians during wars. And, U.S. guilt is clear. Together, the U.S. military, its contractors, and other U.S agents created an environment that was dangerous for civilians. And, U.S. officials lied to start the war.

Agencies for judgment and enforcement are in short supply. The United States denies obligations under the International Criminal Court. Any action by the United Nations Security Council requires U.S. approval. But a remedy does exist.

U.S. intrusion in Iraq registers as one in a long series of military interventions abroad. That’s what empires do. What’s required for justice to prevail is for anti-imperialist forces to rise up. For that to happen, the people’s movement must grow. Early justice is unlikely, but what else is there? 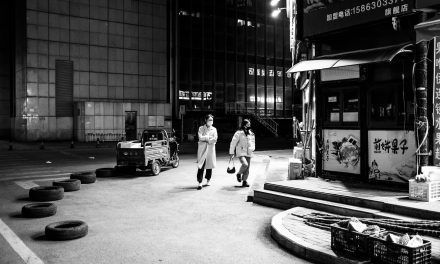