With the hullabaloo about Trump and fascism, it is useful to review Hitler’s first months in power, to get a sense of a real fascist regime.

Hitler came to power January 30, 1933, Trump on January 20, making easy a chronological comparison of their lead ups to power and their first months in power.

The comparison shows how silly and hysterical it is to claim Trump represents fascism. Hitler did not take power by entering into the primaries of a German version of the Republican Party. In complete contrast to Trump, he built, controlled, and ran under the banner of his own fascist party. Hitler also created an armed thug operation, the Brownshirts, to bully progressive organizations. The Brownshirts numbered 500,000 organized men by late 1932, five times the size of the German army.

Four parties contended in the German elections in the summer of 1932: the Nazis, the National Party, the Social Democrats and the Communists all of which won millions of votes.During this election, “In Prussia alone between June 1 and 20 there were 461 pitched battles in the streets which cost 82 lives and seriously wounded 400 men.” “In July, 38 Nazis and 30 Communists were among the 86 dead.” On July 10, 18 were killed, and on July 17, “when the Nazis, under police escort, staged a march through Altona, a working class suburb of Hamburg, 19 persons were shot dead and 285 wounded.”

A world of violence and murder existed between fascists and anti-fascists, just in the space of six weeks, bearing no similarity to the few fistfights and the shutting down of a Trump rally in Chicago during the more than yearlong US electoral season. On January 30, 1933, Hitler was appointed Chancellor. Right after, in Prussia, with two-thirds of the German population, the police force was purged and Nazis replaced police chiefs. The police were then ordered not to interfere with the work of the Brownshirts. The February 17, 1933 Nazi police order stated: “The activities of subversive organizations are … to be combatted with the most drastic methods. Communist terrorist acts are to be proceeded against with all severity, and weapons must be used ruthlessly when necessary. Police officers who in the execution of their duties use their firearms will be supported by us without regard for the effect of their shots….”

Little over two weeks in power, the Brownshirts had been handed the license to bully, beat, even kill leftists and Jews. In contrast, the two week old Trump presidency found its first anti-Muslim executive order blocked by a judge.

Three weeks in power, 50,000 Brownshirts were made part of the police. They began unauthorized arrests, broke into public building and homes and made nightly raids to seize anti-Hitler opponents. Those seized were typically put in newly set up “camps.”On February 24 the Nazis took over the Communist Party headquarters. Communist meetings were banned, their press shut down, and their Reichstag (the German version of the US Congress) deputies arrested. Thus, less than a month in power, the Nazis had beheaded the militant left.

Here, hundreds of thousands had mobilized around the country to protest Trump’s actions, unchallenged by any sort of Trump thugs. February 27, not a month in power, the Reichstag was torched, which the Nazis blamed on the Communists. A vast national witch-hunt ensued. The Nazi’s Emergency Degree declared:”Restrictions on personal liberty, on the right of free expression of opinion, including freedom of the press; on the rights of assembly and association; and violations of the privacy of postal, telegraphic and telephonic communications and warrants for house searches, orders for confiscations as well as restrictions on property, are also permissible beyond the legal limits otherwise prescribed.”

Leaving aside that under Obama and before, the NSA already had eliminated our right to privacy, in US terms this decree would mean Trump had abolished the Bill of Rights and instituted imprisonment without trial before he had even been president for a month. By the middle of March, Nazi thugs had rounded up tens of thousands of political opponents, liberals, Communists and Social Democrats, put them in camps, tortured them, and in many cases killed them. This even included outspoken religious leaders. In Prussia alone, 25,000 Communist, Social Democrat and liberal leaders were arrested and sent to Nazi camps.Brownshirt thugs took over town halls, government offices, newspapers, trade union offices, businesses, department stores, banks, and courts, removing “unreliable” officials.Here in the US, during the same time period, another judge blocked Trump’s revised anti-Muslim travel ban.

On March 21, Hitler was given a decree to arrest anyone criticizing the Nazi party, to be tried in military style courts with no jury and often with no right to defense.On March 23, still before two months in power — as long as Trump has been President — the German Parliament approved the Enabling Act, allowing Hitler to enact laws by decree.On April 7 all Jews were dismissed from civil service jobs.

On May 2, after the Nazis had cynically declared May Day a national holiday, all the trade union offices were occupied, with their property and funds confiscated, and trade union leaders arrested and beaten.

By June 1933, there were 2 million Brownshirts, twenty times the size of the German army, and these “brown-shirted gangs roamed the streets, arresting and beating up and sometimes murdering whomever they pleased while the police looked on without lifting a nightstick…. Judges were intimidated; they were afraid for their lives if they convicted and sentenced a storm-trooper even for cold-blooded murder.”

July 14 all other political parties were prohibited, and the fascists could confiscate the property of any organization it considered anti-Nazi and could summarily revoke anyone’s citizenship. That was fascism. Here, a great number of liberal-leftists call Trump a new Hitler, some even claiming that we live under a fascist regime. Yet Trump does not possess his own party, nor an armed fascist militia obedient to him, let alone one of hundreds of thousands. Trump has not thrown out the Bill of Rights, wiped out the AFL-CIO, sent his political opponents to concentration camps. He can’t even shut down Saturday Night Live. Trump is a billionaire racist, sexist war-monger out to salvage the US corporate empire, nothing more, nothing less.

What lies behind this hysteria about Trump fascism? In almost every presidential election going back generations, liberal-left Democratic Party supporters label the Republican candidate with the political swearword “fascist.” Now it is more shrill. As the Democratic presidential candidates become more and more openly corporate stooges these liberal-left “lesser evil” voters must resort to painting the Republican in extreme terms to win support for their own candidate. We should just be very scared, vote Democrat, or we are doomed. Leftists recognize corporate America owns the two parties, yet many still vote Democrat. Every four years, we must first defeat the so-called fascist, then build our movement. So is the story we are told. This strategy traps us in the Democratic Party. It has worked effectively for generations. Not only does it reinforce our domination by corporate America, but it seriously miseducates people about fascism.

Needless to say, so long as corporate America has the liberal-left tied to their two party system, they have no need for fascism. They need fascism only when their customary method of rule breaks down, and they face a very direct threat of losing control to revolutionary forces. The historic function of fascism is to smash the radicalized working class and its allies, destroy their organizations, and shut down political liberties when the corporate rulers find themselves unable to govern through their charade of democracy. No such problem here.

We do need to fight Trump, just as we would have with Clinton, and should have with Obama. But it miseducates people to paint Trump as qualitatively different. They all rule for corporate America, all have more or less the same program of controlling the 99% and making us pay for the decline of their system. 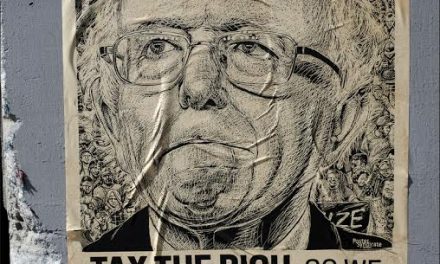 Sanders Supporters Need to Split or Get Off the Pot