Full Marx: Is the Answer Really ‘All in our Genes’? 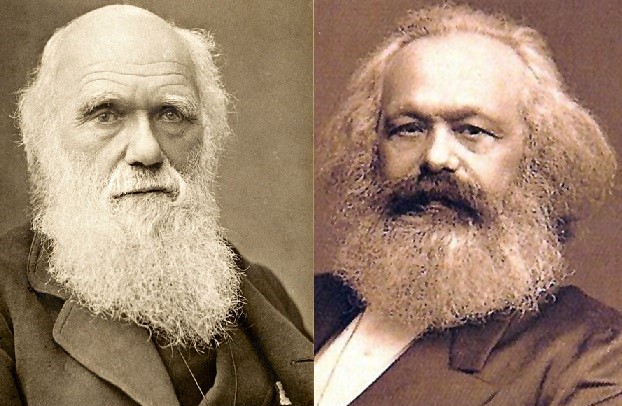 Variants on Darwin’s theory of evolution have been used to justify oppressive racial and social theories. The MARX MEMORIAL LIBRARY takes a look at the genetic question.

Richard Dawkins author of one of the best known texts on human nature, The Selfish Gene, declares we are “machines created by our genes” – that “[w]e are survival machines – robot vehicles blindly programmed to preserve the selfish molecules known as genes.” Less dramatically, and often without an appeal to evolutionary processes, how often have you heard an explanation involving the term “it’s human nature” used to justify or explain greed, competitiveness, aggression, inequality or any other (usually negative) aspect of human behaviour? Arguments for – and against – a “fixed” human nature (or the relative importance of “nature” vs. “nurture”) go back to Aristotle. But the “nature” argument was an integral part of the early 20th century “neo-Darwinian synthesis” of evolution through natural selection with the gene theory of inheritance.

Applied to human behaviour, society and social policy this built on the work of Herbert Spencer — in the 1870s probably the most celebrated and influential philosopher of his time. Ironically, his ashes are interred opposite Karl Marx’s grave in Highgate Cemetery. Spencer invented the term “survival of the fittest” (never used by Darwin) as the metaphor for his social Darwinism, hugely influential in economics and politics as a justification for laissez-faire capitalism. With the “invention” of genes (as hypothetical entities on the chromosomes, well before the elucidation of the structure of DNA) social Darwinism assumed a more sinister, pseudo “scientific” aspect. Much of this was based on the earlier work of August Weismann, whose germ-plasm theory held that inheritance was solely the function of the gametes – egg and sperm. On fertilisation, these produced the soma – the body, which would produce the next generation of eggs or sperm. The soma could be influenced by its developmental environment and but the hereditary material itself – the germ- plasm – carried on unchanged.

This proved a final challenge to the pre-Darwinian evolutionary theories of Jean-Baptiste Lamarck who held that organisms can pass on to their offspring characteristics acquired during their lifetime. Weismann’s biological theories were taken up by the Nazis and formed the basis for “scientific” racism and their fascist notions of Aryan superiority over other supposedly distinct genetic lines (or “races”) – most particularly Jews, Slavs, black people and other “inferior” groups. Similar arguments (usually without the sophistication of any attempt at scientific reasoning) are used by racists today.

After the defeat of fascism formal state espousal of such views was no longer fashionable except in apartheid states such as South Africa. But they were implicitly sanctioned by neocolonial exploitation and imperialist wars and they became what was for a time a respectable basis for research directed to “proving” what was already enacted or advocated in policy. Classic examples include the work of Sir Cyril Burt, educational psychologist to the London County Council, and subsequently Professor and Chair of Psychology at University College, London, who “proved” through studies on identical twins who had been brought up in different environments that intelligence was inherited. He argued that intelligence formed the basis for class distinctions – intelligent working- class children would find their way to the professional classes and the duller offspring of professionals slipped down the ladder to become “working class.” Class distinctions were the inevitable result of differences in heritable intelligence – the working class were “naturally” thick; that’s why they were working class.

Others such as Richard Herrnstein and Arthur Jensen argued that the fact that black people in the United States tended to score lower on IQ tests than white people was because of their genes. Intelligence was inherited, so “compensatory education” programmes aimed at redressing the social disadvantage that black people suffered were a waste of money. Not surprisingly, such views received much criticism – especially when it was shown that Burt had made up much of his data. The whole idea of IQ tests as a measure of some entity or “thing” which some individuals have more of than others has been largely discredited. But the same practice of seeking “scientific” support for social inequalities and norms continues to this day. Desmond Morris’s The Naked Ape (1967) and its successor The Human Zoo and Robert Ardrey’s The Territorial Imperative were classics and hugely influential, despite their demolition by the Marxist philosopher John Lewis in Naked Ape or Homo sapiens? Interestingly Morris, Ardrey and most other similar works of the period were based implicitly on group selection theory (the view that natural selection works at the level of the group rather than the individual) — and Lewis’s response was written from a humanistic, rather than a scientific, perspective.

With the publication of The Selfish Gene (followed by E.O. Wilson’s Sociobiology: The New Synthesis) conventional explanations for class and gender inequalities (and for “human behaviour” in general) focused on individual selection and on individual organisms as the vehicles for the differential reproduction and propagation of replicating molecules. Evolutionary psychology, for example, postulates that men are “naturally” promiscuous, because they produce many sperm and it is in “their” interests (or rather, that of their genes) to make sure that they father as many children as possible. Women, by contrast produce relatively few eggs. They are therefore programmed for domestic chores and monogamy – to ensure those of their eggs that are fertilised, develop to adulthood and in turn reproduce their genes. Extended into modern social roles, men are “naturally” entrepreneurs, adventurous and innovative; women are “naturally” mothers, homemakers (and of course, ever anxious to keep attractive for their men).

Put so crudely the fallacies in this argument are obvious. Dawkins, in defending his thesis, dropped the second, “robot vehicles, blindly programmed” quote above from subsequent editions of The Selfish Gene, and now claims that unlike other animals “we” have a choice, whether to be slaves to our “natural” instincts or to rise above them. As the Marxist biologist Stephen Rose asserts (for example in an interview with Dawkins himself) this is a wonderful retreat to Cartesian dualism – combining mechanical reductionism (attributing individual’s behaviour to their genes) with a vague, idealised and undefined “we.”

Today it is broadly recognised not only that natural selection is not the only mechanism of evolution (something which Darwin himself accepted) but that selection can take place at a variety of levels – at the level of the inherited characteristics of an individual organism (Darwin’s focus); at the level of the “gene” (or rather, genome — of which more below) and at the level of groups of individuals and indeed, whole populations. “Group selection” — for decades distinctly unfashionable among neo-Darwinian biologists — is once again being recognised as a possible evolutionary mechanism in certain circumstances, although it is questionable whether it can be invoked as an “explanation” for altruism. The classic example is the blackbird alarm call whereby the bird giving the call may alert other members of a group to a potential threat – and aid their survival – but in the process become more vulnerable, reducing its own chances of future reproduction.

Altruism is best regarded as a human character trait, for which a materialist explanation would invoke historical and social, rather than biological, determinants. Even more fundamentally, we should question the role customarily assigned to “genes” themselves. The term was coined in the early 1900s to refer to hypothetical entities in an organism’s cells which determined an organism’s hereditable characteristics. The elucidation of the structure of chromosomal DNA in the 1950s provided a mate- rial basis for the gene theory of inheritance. However the “building blocks” (codons) of DNA code for amino acids and more complex molecules, and they act in consort with each other, and with the development of the cell and organism of which they are a part. Some individual characteristics such as haemophilia or colour-blindness can be associated with specific sequences of DNA on particular chromosomes but there are no “genes” for “intelligence,” sexual preference or criminality.

Scientists today normally talk about heritability and the influence of the genome as a whole rather than of individual genes. Yet still their studies are twisted in popular reporting – most recently in headlines such as “Doing a degree is in the genes” and “Why genes are key to university success.” Even the identical (monozygotic)/ non-identical (dizygotic) twin studies on which these headlines were based are capable of different interpretations. As Rose points out, “genetic” explanations of social phenomena are often Just So stories – the “facts” selected to fit the theory and contrary evidence and alternative explanations ignored. Marx himself insisted that the “human essence” was not a fixed entity, located physically in every individual, but rather “the ensemble of the social relations” (including those related to our biology) and something which changed over time.

So next time you hear “it’s in my/ our/ your DNA” – or more generally “it’s human nature” – it’s worth examining the lack of scientific evidence and political motivation for “biological” justifications of the status quo.

The Image of Socialism We Are Fighting For