Germany In the Driving Seat

Statement by the Communist Party of Ireland

The agreement reached at the EU summit meeting is a clear victory for Germany. The decision to hand over more powers in relation to budgetary priorities and on greater supervision will further undermine the sovereignty of this state and the ability of the Irish people to effect change or to reverse the policies being imposed by the external EU-ECB-IMF troika in alliance with the internal troika of Fine Gael, the Labour Party, and Fianna FÃ¡il. Â Â Â Â Â

The proposal to impose stricter rules and controls on budgetary deficits is a clear victory for German monopoly capitalism. It will produce little of real substance and certainly no relief in the massive debt and austerity measures being imposed on the Irish people. The main objective of the summit was to protect the interests of banks, financial speculators and bond-holders over those of the people.

The Irish Government asked for little, and it got nothing.

The further transfer of powers to such unelected bodies as the EU Commission and the notoriously anti-worker European Court of JusticeÂwhose primary function is to protect the interests of big business and to prevent any Âdistortion of the marketÂÂis a grave step towards unelected corporate control over the lives of hundreds of millions of people and a major assault on democracy and national sovereignty.

The decisions flowing from this meeting can only lead to permanent austerity measures upon the Irish people.

It is the people who are being asked to pay the price, and any new treaty must be put to the Irish people in a referendum. 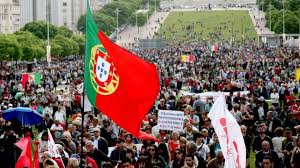 The View from Lisbon