Insurrection in the Heartland 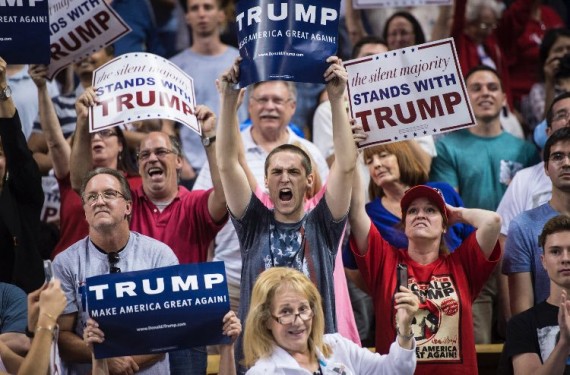 The 2016 US Presidential elections produced a surprising result and a glaring contradiction. Donald Trump will guide the affairs of the most powerful country in the world. And that same person, a rapacious billionaire, enjoyed the votes of a substantial portion of the US working class.

In a rational society, the two thoughts — democratic ascension to power by a tyrannical, vulgar, unsparing capitalist bully and the consent, even support of a desperate working class — could not come together. But the US is not an idealized rational society.

The US, from the time of its founding by wealthy merchants and lawyers, is a state with institutional features meant to dampen or eviscerate any potential electoral movement that might challenge the rich and powerful. The “separation of powers” between three modes of governance, the balanced tension between states’ power and federal power, the bizarre “Electoral College,” and the evolved two-party system virtually assure a republic nearly immune to radical change or electoral insurgency.

Major democratic advances (the ending of slavery, women’s suffrage, desegregation, etc.) have been won on the battlefield and the streets and not in the voting booth. And the ownership of both of the two major parties by monopoly capital virtually guarantees that working people have a minor voice in affairs of the state.

The fate of this election hinged on US states that were battered by the flight of capital to cheap foreign labor markets and the resulting de-industrialization. The ease of capital movement, lower labor and other costs, and advances in logistics caught US workers in the scissors between job loss and radical cuts in pay and benefits. Add the effects of the 2007-2008 economic collapse, and the industrial core of the US working class was devastated.

Social scientists have well documented the dramatic rise in suicides, alcoholism, and drug abuse plaguing the working class over the last decade. What is unique about this moment is that white workers have also felt the brunt of capital’s abandonment of US manufacturing. In the past, the corporate policy of “last hired, first fired” and other racist barriers have insulated white workers from the harshest effects of policies and crises. Because minorities and women were on the workplace margins, they inordinately absorbed the shocks.

But today, white advantages have deteriorated in the face of twenty-first century corporate hyper-exploitation. With the threat of Communism (temporarily) abated, global capitalism doesn’t need to buy the white working class with privilege as often as it did in the past. Consequently, the economic pains of corporate pillage are felt by many white workers as well.

Of course some embraced both responses.

Alienated white workers voted in large numbers twice for Obama– the Obama of “hope and change.” It was not racial tolerance that drove all of them to vote for Obama, but the desire for a break from the neglect of the Bush years.

We now know from the election data that many of the same predominantly white communities voted for Trump in 2016. Wisconsin, Michigan, Ohio, and Pennsylvania, formerly industrial strongholds, all showed a 10-point or more turnaround in favor of Trump from 2012 to 2016. It was not all racial intolerance that drove so many white workers to vote for Trump, but the desire for change, in this instance, from the neglect of the Obama years. Exit polls show that voters wanted someone who “can bring needed change.”

This strange brew of legitimate anger, ignorant racism, and years of endless war and media-stoked xenophobia was exploited by Trump. With more voters opting out of what they see as inconsequential elections every year, the 2016 election was a contest fueled by anger, fear, and disappointment with the insipid choices offered by the bankrupt two-party system.

The failure of traditional institutions to address the pain and hardships endured by workers must be added to that volatile mix. Organized religion, organized labor, and, of course, the political party that workers identify with — the Democratic Party — have offered workers little beyond a cold shoulder.

Worldwide, equity markets reminded us that the capitalist class owns both major US parties. Despite capital’s strong vocal and financial support for Hillary Clinton, stocks rebounded from a pre-election eight-day decline with record-breaking peaks in the US. Investors are confident that President Trump will not wander too far from the reservation; he will cater to the interests of capital first and foremost.

With the pollsters, pundits, and consultants in disarray, the day-after brought widespread paralysis followed by a right and left reaction. Racists and immigrant-bashers emerged from their crevices and loudly proclaimed a new day. To their surprise, lynch mobs did not form in a country that largely rejects crude, violent racism, but remains deaf to institutional patterns of oppression.

Anti-Trump rallies sprang up spontaneously on many campuses throughout the US. While they passionately rejected Trump’s ethnic and gender vulgarity, they have yet to advance many demands, or hints of a common program, though they have sought to force university administrations and a few cities to make campuses “sanctuaries” for diversity.

There will be many other opportunities in the months to come for a fight-back to take shape and for the left to offer leadership as the Trump agenda unfolds. To be sure, the Democratic Party operatives will work diligently to deflect this energy from core economic issues of inequality that anger the working class toward the social liberalism that occupies urban elites.

Missing from the analyses of most commentators is any recognition of the secular trend in US two-party politics towards dysfunctionality. Trump and Clinton are only the latest instantiation of this festering neglect of race and class, a neglect producing greater and greater social fissures with every electoral cycle.

It is only the left, essentially the Marxist-Leninist left that grasps the unique intersection of race and class arising at this moment. It offers the only analysis that explains the historical role of racism and xenophobia in solving capitalism’s problems through war and division and that can lead people through the minefield laid by the cynical Trump candidacy.

In the last instance, it is as the Greek Communists remind, commenting on the two-party system on the occasion of the Trump election: “The people will stop being trapped between ‘Scylla and Charybdis’ when they chart their own course, for rupture with and the overthrow of the system which creates poverty, crises, wars.…”

This article first appeared in the Morning Star (UK) 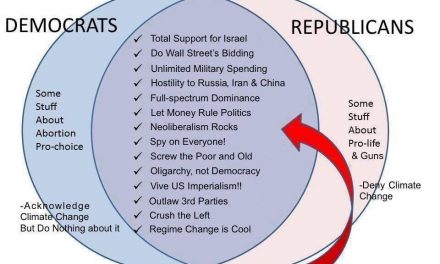