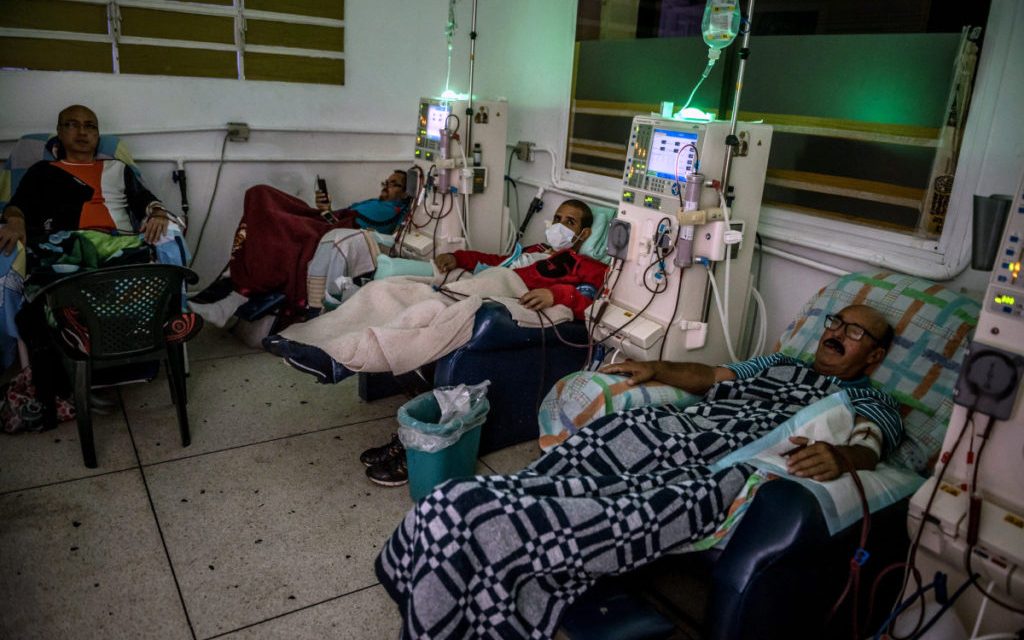 By Lucas Koerner and Ricardo Vaz
March 26, 2019
Fairness and Accuracy In Reporting (FAIR)

A New York Times “exposé” (3/17/19) of Cuban doctors’ supposed interference in Venezuelan elections was riddled with inaccuracies, omissions and misrepresentations.
After debunking Washington’s lies about the burning of “humanitarian aid” trucks on the Venezuelan/Colombian border (more than two weeks after being scooped by independent journalists), the New York Times quickly reverted to form in an article by Nicholas Casey headlined “‘It is Unspeakable’: How Maduro Used Cuban Doctors to Coerce Voters” (3/17/19).
As the title not-so-subtly suggests, Casey claimed to present bombshell revelations regarding the Nicolás Maduro government’s alleged weaponization of Cuban medical personnel as a means of holding on to power. On closer inspection, however, the article is riddled with factual inaccuracies, omissions and misrepresentations.

Relying on the testimony of three Cuban doctors who have defected from the Venezuelan/Cuban health mission and taken up residence in other countries, as well as 16 anonymous sources within Venezuela, Casey provides the reader with shocking vignettes of how Cuban medical personnel have supposedly been used to manipulate Venezuelan politics.
One central allegation is that the Barrio Adentro healthcare mission staff, most of them Cuban doctors, are denying patients care on the basis of political affiliations. One Cuban doctor currently residing in Chile told the Times that one patient was refused treatment “because she was from the opposition.” The only other evidence to substantiate this grave accusation is the account of an opposition mayor who claims he was “denied medication.”
As has been widely documented (Guardian, 10/13/15), defector testimonies are often unreliable, given the political stakes involved. Similar reservations apply to a politician aligned with an opposition spearheading a foreign-backed coup in Venezuela.
Likewise worthy of skepticism is Human Rights Watch Americas director Jose Miguel Vivanco, whose quote, “it is unspeakable,” gives the piece its headline, though a reader might assume these were the words of an actual doctor. Human Rights Watch, whose revolving door with the US national security state is now notorious, can always be counted on to attack the Venezuelan government, though its charges have been debunked on several occasions.
Vivanco is an especially dubious source, given his extremely biased track record on Venezuela. Just over a decade ago, the HRW official was publicly rebuked by over 100 Latin America experts for a report on Venezuela that did “does not meet even the most minimal standards of scholarship, impartiality, accuracy or credibility,” which included similar sweeping allegations of politicized denial of care, based on the second-hand testimony of one individual.

The Times’ questionable allegations of denial of care quickly give way to even dodgier claims of Cuban doctors interfering in Venezuelan politics. “One former Cuban supervisor said that she and other foreign medical workers were given counterfeit identification cards to vote in an election,” Casey wrote, adding that Cuban doctors “were asked to vote with false identification” in 2013.
Anyone who knows how voting works in Venezuela would dismiss these allegations immediately. The first step upon entering a polling station is presenting ID and biometrically scanning fingerprints. Computerized voting screens will literally not open unless a valid fingerprint is presented. Cuban doctors, since they are of course not Venezuelans, would not have their fingerprints in the system, and thus not get past this first step. (It’s worth noting that Cuban doctors in Venezuela number roughly 30,000, in a country with an electorate of around 20 million, making the notion of a secret program to enable them to vote illegally in hopes of affecting electoral outcomes rather far-fetched.)
Another passage suggested a similar lack of familiarity with the Venezuelan electoral process:

On the day Mr. Maduro was elected to his first term, [a Cuban doctor] witnessed officials opening ballot boxes and tampering with votes, including destroying ballots that chose the opposition.

In Venezuela, the vote count is electronic, verified by paper receipts.
First off, there are no “ballot boxes” or “ballots,” because voting is fully automated. After the voter makes their selection on the computer screen, a paper receipt is printed and placed in a box. At the end of election day, 54 percent of all voting machines, chosen at random, have their electronic totals cross-checked with the paper receipts. Destroying the receipts (not ballots) would not serve any purpose, other than raising a red flag when they did not agree with the electronic tally. (If the Times’ source had bothered to name the voting center, one could check the results and confront the National Electoral Council with any discrepancy, since the paper tallies are kept for a number of years.)
Secondly, all parties or candidates have witnesses at every electoral center. At the end of the day, the witnesses and the electoral delegates all sign a certificate validating the results. In the case of the April 14, 2013 election, there was not a single electoral center where opposition candidate Henrique Capriles’ witnesses did not validate the results, nor any reports of destruction of ballots, perhaps because there are no “ballots.”
For someone who covers Venezuela regularly, Casey makes a remarkable number of errors in his account of the country’s electoral system. For example, he wrote, “In mid-2017, Mr. Maduro made a bid to consolidate power: a referendum for a second legislature to replace the opposition-controlled National Assembly.” What took place on July 30, 2017, was an election, not a referendum, for a national constituent assembly, a body that is outlined in Articles 347–349 of the 1999 Bolivarian Constitution, and which is much more than a “second legislature.” Furthermore, the National Assembly was declared “null and void” by the Venezuelan Supreme Court in 2016 (BBC, 1/11/16), after defying a court order to unseat three legislators pending an investigation for electoral crimes.

Given their factual implausibility, Casey’s anonymously sourced claims of ballot-stuffing and illegal voting in the 2013 presidential election represent a thinly veiled maneuver to delegitimize Maduro’s victory, which was challenged by no country in the world except the United States—a fact that is conveniently omitted.
One unnamed source accused the Chavista government of “blackmail[ing]” voters that the opposition would eliminate the Barrio Adentro medical mission if Capriles won. Casey did not inform readers that the Venezuelan opposition has long vowed to suspend bilateral cooperation agreements with Havana should it come to power.
Nor did Casey mention the opposition’s repeated acts of violence against Cuban health professionals and clinics. Following Capriles’ US-sanctioned refusal to recognize the indisputable 2013 election results, and his call for his supporters to “discharge that anger” in the streets, seven people were killed in the ensuing street violence that saw 18 Cuban-staffed neighborhood health clinics set ablaze. The violent anti-government protests of 2014 likewise featured no less than 162 attacks against Cuban doctors, who were prominently lynched in effigy . In omitting these rather important details, Casey succeeded in inverting reality: He presented Cuban medical staff as witting or unwitting gendarmes of a brutal regime, rather than frequent victims of opposition violence .
This whitewashing of right-wing terror extended also to Casey’s framing of the 2017 anti-government mobilizations, which he said led to 100 deaths in a “government crackdown,” leaving out the numerous killings carried out by opposition supporters, including mob lynchings of Afro-Venezuelan men and sniper assassinations of Chavista activists.
In addition to relitigating the internationally recognized 2013 election, Casey repeated the now-boilerplate allegations of fraud in the 2018 presidential elections, pointing to opposition figures barred from running, with “Leopoldo López…dragged between house arrest and a military prison,” and Capriles “banned from running, along with most opposition parties.” Casey didn’t mention that López was convicted of inciting violence during the 2014 street protests, while Capriles was barred due to  corruption allegations that even the opposition has moved to investigate.
Casey’s highly selective picture of Capriles and López is particularly disingenuous, given that both politicians actively participated in the short-lived 2002 military coup, with the former leading an attackagainst the Cuban embassy, and both of them involved in the mob kidnapping of Interior Minister Ramón Rodríguez Chacín. That alone would have disqualified them from holding political office anywhere else in the world.
It is also false that opposition parties were banned, since what was required of them was to revalidate their legal status by collecting a minimum number of signatures following their boycott of the December 10,  2017, municipal elections. Whether or not this was a political hurdle, some opposition parties, such as Acción Democrática, fulfilled it. And the fact remains that opposition candidates did run against Maduro, notably former Lara Gov. Henri Falcón, who was actively undermined by the hardline factions of the opposition, and was even threatened with US sanctions for defying the opposition boycott.

In an article explicitly dedicated to uncovering alleged foreign interference in Venezuelan state and society, it is ironic that Casey entirely omitted the most egregious form of external intervention: US sanctions. Since 2017, Trump’s financial sanctions have battered the healthcare system directly, with recurring cases of medicine shipments blocked or assets destined for imports frozen as a result of US financial crimes enforcement directives, according to Torino Capital chief economist Francisco Rodriguez. In one such case, the Venezuelan government denounced the freezing of $1.6 billion of its assets by Brussels-based financial services agency Euroclear, half of which was reportedly destined for medicine imports.
US economic sanctions also debilitate healthcare indirectly by decimating the Venezuelan economy overall. According to conservative estimates, US financial sanctions cost Venezuela at least $6 billion annually in lost revenues, or around six percent of GDP. For comparison, healthcare spending in Latin America averages approximately seven percent of GDP, and, prior to the crisis, Venezuela was importing around $2 billion in medicine per year. Rodriguez estimates that the new US oil sanctions, amounting to an effective trade embargo, will cost Venezuela an additional 15 percent in real GDP loss, for a cumulative contraction of 26 percent in 2019.
Despite his stated concern for the “politicization” of healthcare in Venezuela, Nicholas Casey doesn’t think it relevant to mention his own government’s deliberate effort to destroy the Venezuelan economy, further devastating the country’s fragile health sector and killing thousands, if not tens of thousands, of Venezuelans. Rather, the New York Times’ Andes bureau chief mobilizes anonymous sources and defectors—whose testimony ranges from dubious to preposterous—to further demonize Venezuela and provide cover for Washington’s murderous regime change policy.