The Republican and Democratic parties interact to crush, co-opt and contain the emergence of a radical left.

Soviet historians published a collective assessment of the US two-party system in the late 1980s.They argued that the system combines, in a dynamic way, consensus and alternative. That is, the US electoral system contains a relatively narrow range of policy options that conform to the interests of the US ruling class.

At the same time, the two parties pose choices that preserve the impression of real differences. Depending on the circumstances, each party manoeuvres to create the appearances of substantive differences, but always within an implicit range that respects and promotes the interests of monopoly capitalism.

In an important sense, a two-party system is the consummate political expression of state monopoly capitalism.

Lenin understood well that the two-party system was “one of the most powerful means of preventing the rise of an independent working class, ie a genuinely socialist party.”Leftists would be well advised to keep this assessment in mind while considering the significance of the 2016 US elections.The US left lost sight of this mechanism when they mistook Barack Obama in 2008 for a genuine departure from this logic.

In retrospect, he was little more than an adjustment, a carefully cultivated alternative meant to stabilise a system rocked by economic crises and failed wars.Of course, everything doesn’t always go smoothly for the two-party juggernaut.And 2016 is an example, in the US and abroad, of a moment when genuine disaffection boils over, unleashing forces threatening stability.

Both parties were poised to anoint candidates with solid corporate credentials, market solutions, and aggressive, consensus foreign policy.But, happily, the people unexpectedly rebelled. The result was a shock to all, but an underestimation that honest analysts gladly embrace.

The Trump rebellion is a complex phenomenon, reflecting the anger of a spectrum of political forces from the far-right to the estranged working class.Trump represents the contradiction of an assault on the political establishment by a renegade billionaire, a rebellion that could only make sense in the suffocating context of the US two-party system.

Since Trump never developed a defining ideology, his battle against an elusive enemy appealed to a wide spectrum of social forces.

As the Washington Post recently reported, a significant number of Trump supporters paradoxically voted for Barack Obama in 2008, challenging the view that his supporters are all racists and xenophobes.

One former Obama voter and union member, Vinny Pechy, an electrician from New Jersey, is drawn to Trump for the same reason he liked Sanders: “The trust thing, his values.”I’m fed up with the old, fat, white, grey-haired men who run things,” Pechy told the Washing Post.”I’m white, but those guys are about entitlement, and Hillary falls right into that category, even though she’s not a man.”Bernie Sanders, on the other hand, garnered 12 million votes in the Democratic primary for an audacious agenda of economic reform reminiscent of the New Deal and virtually unseen in 40 years. He was unfazed by media red-baiters who called it “socialism.”

In fact, he embraced the word.An astute observer, Bruce Dixon of Black Agenda Report, identified Sanders’s ultimate role as “sheep-dogging” the Democratic Party dissidents back into the fold.Sanders did not disappoint: he endorsed and pledged support for Clinton with some enthusiasm. Polls suggest that, after much anger and disappointment, 85 to 90 per cent of Sanders supporters will vote for Hillary Clinton. Likely, more will join them in the approaches to the election.

Nonetheless, that leaves an uncommon number of activists, many young, who are thoroughly disgusted with both the two-party system and the Democratic Party.Depending on their response, they may well serve as the cadre for a new generation of radicals. There is currently an intense campaign in the US for their attention conducted by both the serious and the frivolous left.Many are attracted to the Jill Stein presidential campaign, mounted under the auspices of the Green Party.

Stein’s programme incorporates most of the demands made by Sanders, but is much more aggressively anti-monopoly and anti-imperialist, addressing the major weakness of the Sanders’s effort.

Thanks to WikiLeaks, we now know that the Democratic Party establishment did much to covertly subvert the Sanders campaign. The same process is recurring now, with Democratic Party surrogates surfacing opportunely to sling mud at Stein and the Green Party.The most remarkable fact about the two Establishment candidates is their unpopularity with their respective parties, a fact that underlines the profound crisis of the two-party system.

Therefore, the battle between them has become a contest to further tarnish the opponent with the hopes that voters can be severed from their normal party allegiances.Trump has pursued this path with a rabid relish that consistently shocks the accustomed civility of election battles.His most recent attack on the family of a Muslim soldier killed in Iraq failed to stir the anti-Muslim sentiment that he hoped to exploit.

Instead, it insulted the blustery patriotism that infects both parties’ stalwarts. As a result of this tactical blunder and others, polls showed that almost a quarter of conservative voters plan to back Clinton.

Clinton equally demonises Trump. The difference is that the major media, speaking for most of the ruling class, magnifies the charges.

For example, Trump has made a number of sensible comments about the anti-Russia, anti-Putin hysteria rampant among policy-makers of both parties.Attacks rained down on Trump from every medium and every political tendency. Even the liberal-left magazine The Nation — a solid backer of Clinton — was compelled to note the viciousness of this attack, calling it neo-McCarthyism.”No-one wishes to defeat Donald Trump more than The Nation.

But to adopt the pernicious language of McCarthyism is to turn our backs on the best traditions of our country in favour of the worst.

“Contrary to the hopes of the Sanders supporters, Clinton’s strategy is to pursue Republican votes, a strategy that calls for a rightward drift away from the issues that Sanders’s supporters won in the platform negotiations.

Given that most corporate Republicans are unhappy with or opposed to Trump, this approach has boosted her already robust fundraising.It is customary in US politics, though unspoken, for the incumbent president to use whatever tools can be mustered (military spending, temporary hiring, etc) to bolster the economy going into a national election.Despite signs of serious weakness, including a collapse of job creation in May, the jobs picture and the stock market have been inflated to deliver the facade of prosperity.

As The Wall Street Journal reported: “the improvement in the labour market — alongside a stock market hitting fresh records in recent weeks — could tilt some undecided voters as they enter a crucial stretch ahead of November’s election.”The powerful forces arrayed against Trump make his election unlikely. Despite an unprecedented contempt for their party’s candidate, wayward Democrats are being shepherded with the customary lesser-of-two-evils ploy.Of course further WikiLeaks revelations might damage the Clinton juggernaut, but even then a forgiving media could minimise the damage.

The US two-party system is a formidable tool of class rule. And the two parties are incredibly resilient. Realignments, rebalancing, and restructuring allow the parties to adapt to challenges while maintaining the goal of protecting and promoting monopoly capital.

The party of Lincoln, devastated in the 1964 elections, rode racism back to power four years later.The same party, shamed by the Watergate scandal, emerged revitalised less than a decade later with the election of Ronald Reagan.

The recent putsch against Tea Party legislators in Kansas, engineered with corporate Republican support, further demonstrates the determination of the Republican Establishment to stamp out unmanageable insurgents like the Tea Party and Trump and bring order back to the two-party system.And the Democrats, as guardians against the left, have weathered insurgencies again and again.After the disenchantment with the Democratic Party in the late ’60s, the Democrats brought the left back into the fold with the McGovern candidacy.

The Democrats are adept at containing and co-opting movements for change.The Kennedy campaign in 1980, the Jesse Jackson primary run in 1984 and the Howard Dean campaign in 2004 were all thwarted by the party Establishment and media sensationalism.

Hopefully, this time things may turn out differently. Sanders’s 12 million votes — whether ushered back into the Democratic Party or relocated outside — constitute a serious challenge to a Democratic Party that has no answer to the continuing economic crisis and growing inequality.

In the eight years since Obama was elected, the percentage of Democratic voters who identify their politics as “very liberal” has grown from 18 per cent to 25 per cent, a shift that likely will continue and cannot be contained within the Democratic Party.

Though the conditions are ripe for the growth of a genuine alternative to the two-party system, everything depends on the left’s ability to construct a viable, united and appealing political vehicle for challenging the two main parties.

Failure to do so means we will be on the same treadmill in four years. 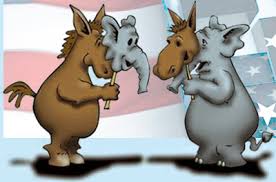