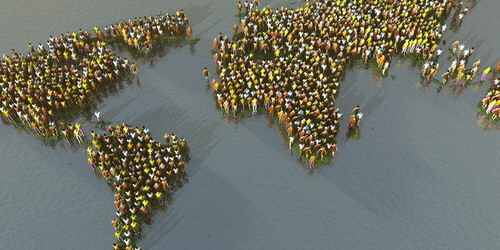 Over-population of a particular kind contributes to planetary environmental degradation, poverty, and wars without end. Thanks to Oxfam, we know just who the offending individuals are. Eight people now have the same wealth as the poorest half the world’s population.

Heading the list of the world’s richest is Microsoft magnate Bill Gates; number three is investor Warren Buffett. The Gates Foundation, bolstered by Buffett’s fortune, is the world’s largest private charity. Without a hint of irony, the foundation’s website describes their vision to “develop strategies to address some of the world’s most challenging inequities.”

The supreme irony of our modern era – really a contradiction – is that the forces of production have developed to the level that there is a material basis for eliminating poverty for the first time in human history. Yet the relations of production are such that unprecedented accumulations of wealth are ensured, threatening our very existence with destruction by either WMDs or ecocide also for the first time in human history.

The Gates Foundation is a leading modern promoter of the neo-Malthusian gospel of over-population, which has historical antecedents in British cleric Thomas Malthus’s theories of 1798. The ideology of over-population diverts criticisms of capitalist social relations of unequal distribution, serving to justify a system that creates needs without the means of satisfying them.

After World War II, Malthusian theory was resurrected to support the ideological initiatives of the ascendant US superpower and its cohorts. This ideological initiative in the service of international capital took place in the context of a wave of national liberation struggles in the post-war period. Peasant tillers of the soil were demanding land reform. To this rightful claim, the Cold Warriors offered population control coupled with the commercialization of land using the model of US agribusiness.

According to the Gates Foundation, population growth “contribute(s) significantly to the global burden of disease, environmental degradation, poverty, and conflict.”

“There can be little doubt that the real aim of the neo-Malthusian resurrection of Malthus, then, was to resurrect what was after all the chief thrust of Malthusian ideology from the outset; that all of the crucial problems of bourgeois society and indeed of the world could be traced to over procreation on the part of the poor.”

“The biggest danger of blaming over-population for environmental problems,” warns Anne Hendrixson of the Population and Development Program at Hampshire College, “is that it ignores the real culprits.”

Conceptually underlying this particular understanding of the dynamics of human population growth is that these deleterious effects are somehow natural, because human reproductive activity is itself natural. In fact, poverty and environmental destruction are not simply and inevitably natural consequences of the human condition but are mediated by particular historical circumstances.

The high fertility rates of the poor and the high resource consumption rates of the rich are both environmental issues that should not be counter-posed, but should be seen as keys to understanding a single larger solution to environmental destruction.

For the super-rich such as Gates and Buffett and their self-serving foundations, over-consumption is not an especially troubling problem but over-population is. Illustrating the consumption gap, Oxfam reports “someone in the richest one percent of the world’s population uses 175 times more carbon on average than someone from the bottom 10 percent.”

Poverty is an inevitable by-product of a socio-economic system that generates increasingly inequitable wealth. Wealth is linked as a driver of population growth because the high fertility rates of the poor are a response to their precarious condition. A large family is the poor person’s work force and retirement fund.

Martin Luther King, Jr., commented, “I never intend to adjust myself to economic conditions that will take necessities from the many to give luxuries to the few.” The 1960’s counterculture slogan “serve the poor…eat the rich” put it more crudely.

The more trenchant predicament, though, is not so much a moral one that the super-rich have too much money and live in obscene luxury, but the political one that they have too much power. Let them keep their mansions and yachts, if only they’d hand over their senators, generals, and presidents.

As Bill and Melinda Gates counsel:

“Our friend and co-trustee Warren Buffett once gave us some great advice: ‘Don’t just go for safe projects,’ he said. ‘Take on the really tough problems.’”

Surely ending wealth inequality and the capitalist system that produces it must top the to-do-list.

Roger D. Harris is on the State Central Committee of the Peace and Freedom Party, the only ballot-qualified socialist party in California.