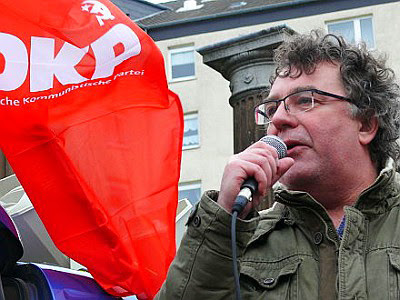 Berlin – If one thing can be said for the German Communist Party (DKP), it’s that it sticks to its principles. The DKP was the communist party that operated in West Germany in the years when the country was split between East and West.

Although the old East German ruling party – the Socialist Unity Party (SED) – and a variety of left social democrats and other progressive groups have long since come together in the Left Party (Die Linke), the DKP prefers to keep an independent profile. “Our belief is that we need to maintain a Marxist-Leninist party with a clear goal of socialism,” said Patrik Köbele, the president of the DKP, when he was interviewed by People’s World last week at the 20th Congress of the Portuguese Communist Party in Lisbon. “We have supported many Die Linke candidates in elections all over Germany, but we feel that their aim is too much in only a parliamentary direction. We believe in the need to focus on the direct needs of working people – fighting with them on all the issues and mobilizing demonstrations whenever we can.”

Köbele said, “We don’t disagree with Die Linke that revolution doesn’t happen tomorrow but we do believe that the issue of socialism has to be kept front and center and we see some problems when you enter coalitions, as die Linke often does, as a junior partner. The big partner takes all the credit for the good things and the little partner gets all the blame.” Köbele said that for the 2017 elections, the DKP is intending, for the first time, to field candidates for parliament in each of the German states. “Is it wise to do this when the party is gaining less than one percent of the vote, well under the five percent needed to gain a parliamentary seat?” he was asked.

“We think we have to do this to make sure the goal of socialism is kept on the agenda and to make sure that there is always present a candidate who puts forward a position against militarism and German participation in aggressive actions overseas,” he said. Köbele said the KPD’s fight is not against the rest of the left but “against neoliberal capitalism.” “One of the important things to us,” said Klaus Linder, a member of the DKP’s executive committee in Berlin, “is to challenge the attacks on the legacy of the GDR [German Democratic Republic, or East Germany] and the socialist countries.

Some in Die Linke, I believe, do not see the importance of stopping the continuing attempts to say only bad things about the history of the GDR. “The GDR had a policy of peace. They made mistakes but they also made great progress. They eliminated poverty and millions there led productive and happy lives.” Linder said that since the end of the GDR after reunification in 1990, there have been cuts in social programs across Germany. Attacks on the rights of workers have also increased because the pressure to yield to the labor movement that was felt by employers was lifted with the demise of the GDR. “When there were union negotiations in the West in the GDR days, it was often said that the boss, the union, and the GDR were at the table. Now we don’t have the GDR there anymore, so there is less pressure on the bosses to make concessions.” The main focus of Linder’s political work in Berlin, he said, is in the area of housing struggles.

Berlin today is the scene of intensive gentrification efforts aimed at driving the working class out of entire neighborhoods. In 2003, the Berlin Senate abolished rent stabilization, and Linder said that one of his biggest problems with Die Linke was that, at the time, it did not wage a fight to save the stabilization law. “They are fighting now for more affordable housing, but they accept housing that is built by private interests also. We insist on public housing – and public housing only – because we believe every reform has to not just help the workers but also hurt the ruling class.” He said that a major focus for his party nationally is to build the peace movement. “Our members and everyone they can influence turn out for all the peace demonstrations here in Berlin,” Linder said. “It’s a very important part of our work.”

Linder is considered somewhat of an expert in his party on the rise of the ultra-right in Germany and has watched closely the development of the AfD, the extreme right-wing Alternative for Germany Party. “The AfD,” he said, “is a lot like Trump in your country. “When they started out they always pushed the go-it-alone populist approach calling for getting out of the EU, calling for freeing Germany from international domination, and even sometimes calling for no sanctions against Russia when the U.S. wanted them. “But in the end, they show their true colors. They line up behind the EU policy of squeezing poorer countries like Spain, Greece, and Italy, and they back NATO to the hilt.

Their program is clear; they back all the aggressive international structures.” Kinder said the AfD is making one of its biggest pushes in areas of the former GDR where many manufacturing and industrial workers have lost jobs and small farmers have been hurt by larger agribusiness concerns. “It’s a fake kind of populism,” he said, “and we have to fight them but we don’t see them as an isolated thing. What gives rise to them is an exploitative neoliberal economic and political system that is highly anti-communist. And you don’t need communist countries in order to have anti-communists. The anti-communists always find a way to spread their harmful and dangerous politics.”