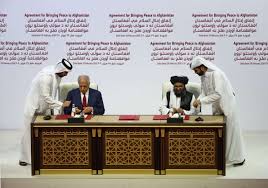 It’s true that the Trump administration signed a “peace deal” with the Taliban — something that eluded both George W. Bush and Barack Obama — but a closer look at the agreement reveals it to be riddled with conditions that are fraught with obstacles.

The terms of the deal suggest that Trump is more interested in boasting that he’s fulfilling his campaign promise to bring the troops home than he is committed to achieving real peace in Afghanistan. This fact has also been noted by Trump’s former national security aides, some of whom have said that the president “is far less interested in an actual Afghan peace” than in claiming he is making good on his vow to withdraw the U.S. troops.

The agreement announced on February 29 should not rightly be called a “peace deal,” Rep. Barbara Lee (D-California) said in a statement. Although the agreement “is a step forward,” Lee noted, “It leaves thousands of troops in Afghanistan and lacks the critical investments in peacebuilding, human-centered development, or governance reform needed to rebuild Afghan society.”

Afghan women activists Mary Akrami, Sahar Halaimzai and Rahela Sidiqi criticized the agreement and the process leading to it in USA Today: “Afghan women and representatives from civil society and other minority groups should have been at the table for the U.S.-Taliban talks that led to this agreement, but we were not.”

Trump’s “Agreement for Bringing Peace to Afghanistan” sets forth a plan for withdrawing all foreign forces from Afghanistan, a mutual release of prisoners, Taliban prevention of attacks against U.S. and allied forces from Afghan soil, and negotiations between the Taliban and the Afghan government. Although it claims to be “a comprehensive peace agreement,” as Lee points out, “this so-called ‘peace deal’ is anything but.”

Withdrawal Timeline for All Foreign Forces

The agreement establishes a timeline for the withdrawal of all foreign forces from Afghanistan. It says the “United States is committed to withdraw from Afghanistan all military forces of the United States, its allies and Coalition partners, including all non-diplomatic civilian personnel, private security contractors, trainers, advisors, and supporting service personnel” no later than 14 months after the agreement is announced.

Within the first 135 days, the U.S., allies and the Coalition will reduce the number of forces to 8,600 and withdraw all forces from five military bases. The remaining 8,600 forces (the same number that remained when Obama left office) is “the minimum number of Special Operations forces, intelligence officers and support and security personnel that the Pentagon and C.I.A. believe are necessary to hold the capital, Kabul” and fight the Islamic State, David Sanger wrote in The New York Times.

Apparently, the U.S. wants “to keep intelligence operatives on the ground fighting Isis and al-Qaida,” The Guardian reports. While the CIA won’t increase its presence in Afghanistan, it will remove its personnel “more slowly than the military,” according to sourcesquoted by the The New York Times.

The U.S., allies and Coalition will withdraw “all remaining forces from Afghanistan” by the end of the remaining nine and a half months.

But, Sanger cites reports of “a series of not-so-secret annexes to the agreement that allow both Special Operations forces and the C.I.A. to retain a presence in the country.”

Negotiations Between Taliban and Afghan Government

The Taliban will begin “intra-Afghan negotiations with Afghan sides on March 10, 2020.”

But since the contested election between Afghan President Ashraf Ghani and Abdullah Abdullah, it is unclear with whom the Taliban will be negotiating. On February 18, the Independent Election Commission declared Ghani the winner. Abdullah disagrees and is threatening to form a parallel government.

The agreement, which was announced after a seven-day “reduction in violence,” requires “dialogue and negotiations” about “a permanent and comprehensive ceasefire.”

The U.S. commits to work on a plan to “expeditiously release combat and political prisoners” by March 10. The Afghan government would release up to 5,000 Taliban prisoners and the Taliban would release up to 1,000 prisoners they are holding. The goal of “the relevant sides,” facilitated by the United States, is to release “all the remaining prisoners” within the ensuing three months.

But since the Afghan government was not part of the pre-agreement negotiations, it did not agree to the release. In fact, Ghani said on March 1 that he does not intend to release 5,000 Taliban prisonersby the March 31 date for initiation of negotiations with the Taliban.

The Taliban won’t come to the negotiating table unless the prisoners in Afghan custody are released.

Taliban Agrees to Prevent Attacks Against U.S. From Afghan Soil

Furthermore, the Taliban “will prevent any group or individual in Afghanistan” from threatening U.S. and allies’ security and will block them from training, recruiting and fundraising.

But it is unclear whether the Taliban is capable of preventing terrorist groups from launching attacks from Afghan territory. “We will not allow our land to be used against any country including the U.S.,” Suhail Shaheen, spokesman for the Taliban’s Qatar office, told The Washington Post, “but I am talking about the area where we have control.”

Indeed, as Douglas London, Georgetown University adjunct professor and former senior CIA officer, wrote in The New York Times, the Taliban is “diverse, decentralized and factionalized,” which leaves enforcement of the agreement in doubt. The Taliban “has historically been controlled by regional warlords with no enduring loyalty to any particular ideology, leader or cause,” London noted. Moreover, members of the Taliban’s negotiating team are “largely disconnected from and disrespected by the Taliban’s senior leadership.”

U.S. Review of Sanctions Against Taliban

When negotiations between the Taliban and the Afghan government commence, the U.S. “will start diplomatic engagement” with other Security Council members and Afghanistan to remove the Taliban from the sanctions list.

U.S. Commits to Refrain From Threat or Use of Force Against Afghanistan

In a provision confirming their obligations under the United Nations Charter, the U.S. and its allies “will refrain from the threat or the use of force against the territorial integrity or political independence of Afghanistan or intervening in its domestic affairs.”

The U.S. will “seek economic cooperation for reconstruction” from the new Afghan government during their negotiations and “will not intervene in [Afghanistan’s] internal affairs.”

Finally, the United States will ask the Security Council to endorse this agreement.

After 18 Years and Loss of Blood and Treasure, U.S. Hands Afghanistan Back to Taliban

Bush illegally launched “Operation Enduring Freedom” in October 2001, in retaliation for the September 11 terrorist attacks. After 18 years, tens of thousands killed and more than $2 trillion spent, the U.S. government is returning Afghanistan to the Taliban.

“United States went to war against the Taliban, and then almost two decades later, handed Afghanistan back to the Taliban,” Vijay Prashad, foreign policy expert and director of the Tricontinental Institute for Social Research, noted ironically.

The ICC Pre-Trial Chamber agreed with Bensouda but refused to open a formal investigation, citing doubt about whether it could secure “meaningful cooperation from relevant authorities” which limited the “prospects for a successful investigation.” Bensouda appealed the ruling.

On March 5, the ICC Appeals Chamber will issue a judgment affirming or reversing the Pre-Trial Chamber’s refusal to initiate an investigation.

Meanwhile, the Taliban control or claim to control almost half of Afghanistan’s districts, “more territory . . . than at any point since 2001,” according to the Pentagon.

Robert Malley, president of the International Crisis Group, told The Intercept’s Mehdi Hasan that the reason the Taliban “got so much out of the deal” is that “after two decades, the U.S. has failed to win an unwinnable war.”

Nevertheless, The Washington Post’s explosive report titled “The Afghanistan Papers” reveals that the Bush, Obama and Trump administrations all lied routinely about U.S. success in the war.

In his op-ed in The Times, London opines that Trump’s special envoy for Afghanistan, Zalmay Khalilzad, who negotiated the so-called peace deal for the United States, only wants the agreement to survive until the fall election. London wrote that Khalilzad has his sights set on being appointed secretary of state in a second Trump administration.

If the deal falls apart, Trump has threatened to “go back with a force that no one’s ever seen.”

In the meantime, Trump, whose overwhelming motive is to be reelected, can claim bragging rights about securing a “peace deal” with the Taliban.