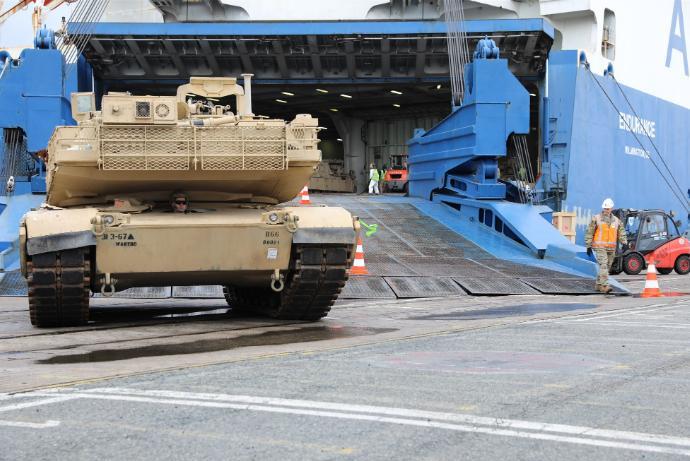 In the midst of a staggering virus epidemic that has shut much of Europe down, the insane and arrogant United States is presently sending 30,000 Army troops throughout Europe for war games.

As the soldiers emerged from their transport planes they shook the hands of US and European military officials welcoming them to the hot bed of corona-virus.

Exercise DEFENDER-Europe 20 is the deployment of a division-size combat-credible force from the United States to Europe, the drawing of equipment and the movement of personnel and equipment across the theater to various training areas.

U.S.-based equipment will leave from ports in four states and arrive in six European countries. This will require the support of tens of thousands of service members and civilians in multiple nations.
U.S. service members will then spread out across the region to establish intermediate staging bases with multinational forces and participate in various annual exercises.

DEFENDER-Europe 20 is the largest deployment of U.S.-based forces to Europe for an exercise in the more than 25 years.

Ostensibly this massive war game is to ‘protect’ the people of Europe from the exaggerated ‘threat’ from an attack by Russia.  Of course that is total nonsense.  The US-NATO are in fact threatening Russia and when these wars games are over much of the military hardware delivered there will be left in large new ‘storage depot’ bases located in Poland and other locations near Russian borders.

Of course the US will likely be ‘leaving’ and ‘spreading’ something much more dangerous during these exercises.  There is no way in hell that during this current pandemic many of these troops won’t become ‘carriers’ of the virus.  What message is being sent to the people of Italy, Germany or France that they should lock themselves inside their homes while US troops play war throughout Europe?

Peace groups in Europe are now demanding that these provocative war games be cancelled but so far the US military is ignoring these legitimate concerns.

And what happens when these likely ‘contaminated’ troops return to the US – to be fanned out across this nation – bringing home the contagion that they carry inside their bursting patriotic chests which now are loaded with the virus?

When will the world begin to realize that the USA is not here to help you?

Update:   On March 13, 2020, the German Bundeswehr command announced a decision to withdraw from the NATO anti-Russian exercises Defender Europe 20. Due to the spread of corona-virus, German troops will not be involved in maneuvers. The main training venue is training grounds in Poland and Germany.

The departure of the Bundeswehr from the exercises of Defender Europe 20 means a stop on the entire supply line of military equipment and weapons for the exercises. According to the AFP news agency, the further transfer of American soldiers to exercises from the US through German airports has been stopped. This means the actual curtailment of the exercises.

U.S. European Command (EUCOM) announced that the number of U.S. troops participating in DEFENDER-Europe 20 was being cut back, although several U.S. units have already arrived and moved into position in NATO alliance states.

“In light of the current corona-virus outbreak, we will modify the exercise by reducing the number of U.S. participants,” the EUCOM statement said. “Activities associated with the exercise will be adjusted accordingly, and we’ll work closely with allies and partners to meet our highest priority training objectives.”

As part of a modified war exercise, they expect that an armored brigade combat team already deployed to Europe will conduct gunnery and other combined training together with Allies.

In parallel, preparations for war games called Aurora 20 is continuing according to plan. Aurora 20 – the largest military exercise in years will include a debut of the Pentagon’s Patriot missile system – is due to take place in Sweden from May 11 to June 7. Preparations already include transport of equipment and soldiers to Sweden.

Update: Shortly after this article was published the US/NATO massive military exercise ‘Defender Europe 2020’ was canceled over the covid-19 pandemic. The Pentagon had already deployed some 6,000 troops and 3,000 pieces of equipment to Europe by March 13, when the transfers were halted amid the rapid spread of the coronavirus.

Canceling the drills was a positive decision from a public health and national security perspective. Having troops in Europe as the virus was spreading rapidly was a risk not only to soldiers but to civilians. Hopefully, these drills are never rescheduled as we do not need Europe and the US practicing war against Russia. It is time to de-escalate, not escalate tensions between Russia and Europe.

2nd Update: U.S. Commander in Europe, Lt. General Christoper Cavoli, may have been infected after attending a recent military conference in Wiesbaden, Germany.   Also, the top health advisor to the U.S. Joint Chiefs of Staff, Air Force Brig. General Paul Friedrichs has also admitted that the number of COVID-19 cases among the Pentagon’s armed forces may be far higher than is being reported. 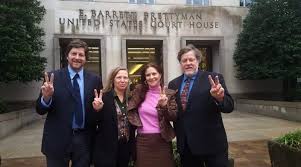 Update on Charges Against the Embassy Protectors 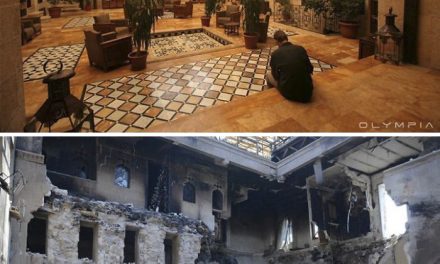