Amid rising tensions and threats of both conventional and nuclear war between the United States and North Korea, China has sent an ominous warning that “a conflict could break out at any moment.”

“Lately, tensions have risen between on the one hand the United States and the Republic of South Korea and on the other, the DPRK, and one has the feeling that a conflict could break out at any moment,” warned Chinese Foreign Minister Wang Yi on Friday.

“We call on all parties to refrain from provoking and threatening each other, whether in words or actions, and not let the situation get to an irreversible and unmanageable stage.”

Yi said that “all relevant parties should be highly vigilant” about the situation and that war would result in a situation “in which everybody loses and there can be no winner.”

China’s comments come amid a series of escalations across the Korean peninsula in recent weeks and increasing concern that U.S. President Donald Trump’s maverick foreign policy approach could lead to an intervention. North Korea, however, seems unwavering in its approach to the escalations.

North Korean Vice Foreign Minister Han Song Ryol said Friday that it was the U.S. and not North Korea that was provoking the situation. “We will go to war if they choose,” Han told the Associated Press.
“Whatever comes from the U.S., we will cope with it. We are fully prepared to handle it … We’ve got a powerful nuclear deterrent already in our hands, and we certainly will not keep our arms crossed in the face of a U.S. pre-emptive strike,” Han continued calmly.

Taking to his Twitter account, Trump said that it would be “far better for them (china) if they solved the North Korea problem.”
“North Korea is looking for trouble. If China decides to help, that would be great,” Trump continued tweeting. “If not, we will solve the problem without them!”

Tweets and rhetoric aside, Pyongyang is angered by the deployment of a U.S. Navy carrier strike group led by the USS Carl Vinson to the Korean peninsula, a move that the foreign ministry branded as “reckless,” which could push relations to the brink of war.

Trump’s ordering of missile strikes against Syria has also helped to fuel tensions, with North Korea labeling the strike “an unforgivable act of aggression” that showed its decision to develop nuclear weapons was “the right choice a million times over.”

China is seen a key player in the region and is the only country that has given North Korea any political backing. Beijing, however, like the rest of the international community, has been critical of Pyongyang’s nuclear weapons testing programs.

China along with the U.S. has been pushing for increased sanctions against North Korea for its weapons programs. Since February, under U.N. sanctions, China has banned the importation of North Korean coal, the country’s biggest export.

In defiance of U.N. sanctions and international efforts to stop North Korea’s nuclear programs, Pyongyang has conducted five nuclear tests and the U.S., in particular, is concerned there may be a sixth in an effort to develop a weapon capable of reaching U.S. soil.

North Korea, however, sees its nuclear capability as a part of an important defense and deterrence against imperialist threats, where other nuclear states, such as the U.S., have massive arsenals of nuclear warheads.

South Korea – who is still technically at war with the North – has agreed to host the U.S.’s Terminal High Altitude Area Defense, THAAD, anti-missile system. While the defense system has drawn protests from many South Koreans, officially Seoul and Washington say THAAD will offer protection from North Korean attacks. China, however, has criticized the system, arguing its radar could enter Chinese territory.

To further complicate the tricky relations in the region – which Trump claimed during the campaign that he could settle with North Korean leader Kim Jong Un over “a hamburger on a conference table” in the White House – Japan is reportedly deploying warships to the region alongside U.S. vessels. 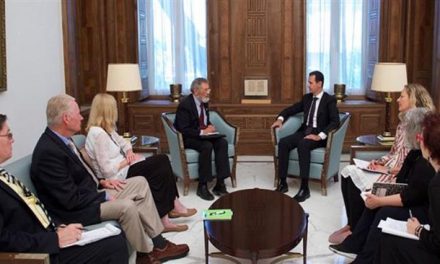 Report Back: US Peace Delegation to Syria 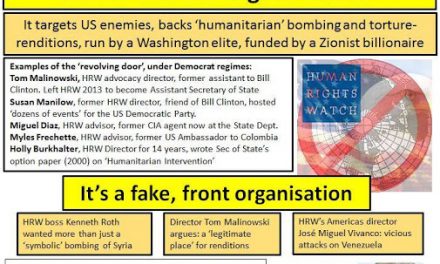