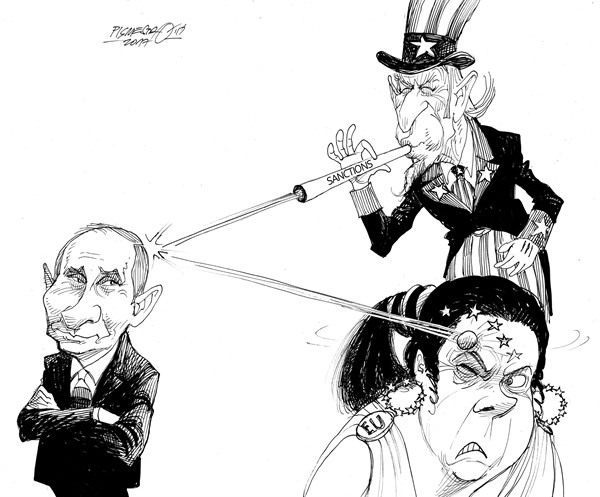 Do they know what they are doing? When the U.S. Congress adopts draconian sanctions aimed mainly at disempowering President Trump and ruling out any move to improve relations with Russia, do they realize that the measures amount to a declaration of economic war against their dear European “friends”?

Whether they know or not, they obviously don’t care. U.S. politicians view the rest of the world as America’s hinterland, to be exploited, abused and ignored with impunity.

The Bill H.R. 3364 “Countering America’s Adversaries Through Sanctions Act” was adopted on July 25 by all but three members of the House of Representatives. An earlier version was adopted by all but two Senators. Final passage at veto-overturning proportions is a certainty.

This congressional temper tantrum flails in all directions. The main casualties are likely to be America’s dear beloved European allies, notably Germany and France. Who also sometimes happen to be competitors, but such crass considerations don’t matter in the sacred halls of the U.S. Congress, totally devoted to upholding universal morality.

Under U.S. sanctions, any EU nation doing business with Russia may find itself in deep trouble. In particular, the latest bill targets companies involved in financing Nord Stream 2, a pipeline designed to provide Germany with much needed natural gas from Russia.

By the way, just to help out, American companies will gladly sell their own fracked natural gas to their German friends, at much higher prices.

That is only one way in which the bill would subject European banks and enterprises to crippling restrictions, lawsuits and gigantic fines.

Following the July 2015 deal ensuring that Iran could not develop nuclear weapons, international sanctions were lifted, but the United States retained its own previous ones. Since then, any foreign bank or enterprise contemplating trade with Iran is apt to receive a letter from a New York group calling itself “United Against Nuclear Iran” which warns that “there remain serious legal, political, financial and reputational risks associated with doing business in Iran, particularly in sectors of the Iranian economy such as oil and gas”.

The risks cited include billions of dollars of (U.S.) fines, surveillance by “a myriad of regulatory agencies”, personal danger, deficiency of insurance coverage, cyber insecurity, loss of more lucrative business, harm to corporate reputation and a drop in shareholder value.

The United States gets away with this gangster behavior because over the years it has developed a vast, obscure legalistic maze, able to impose its will on the “free world” economy thanks to the omnipresence of the dollar, unrivaled intelligence gathering and just plain intimidation.

European leaders reacted indignantly to the latest sanctions. The German foreign ministry said it was “unacceptable for the United States to use possible sanctions as an instrument to serve the interest of U.S. industry”. The French foreign ministry denounced the “extraterritoriality” of the U.S. legislation as unlawful, and announced that “To protect ourselves against the extraterritorial effects of US legislation, we will have to work on adjusting our French and European laws”.

In fact, bitter resentment of arrogant U.S. imposition of its own laws on others has been growing in France, and was the object of a serious parliamentary report delivered to the French National Assembly foreign affairs and finance committees last October 5, on the subject of “the extraterritoriality of American legislation”.

The chairman of the commission of enquiry, long-time Paris representative Pierre Lellouche, summed up the situation as follows:

“The facts are very simple. We are confronted with an extremely dense wall of American legislation whose precise intention is to use the law to serve the purposes of the economic and political imperium with the idea of gaining economic and strategic advantages. As always in the United States, that imperium, that normative bulldozer operates in the name of the best intentions in the world since the United States considers itself a ‘benevolent power’, that is a country that can only do good.”

Always in the name of “the fight against corruption” or “the fight against terrorism”, the United States righteously pursues anything legally called a “U.S. person”, which under strange American law can refer to any entity doing business in the land of the free, whether by having an American subsidiary, or being listed on the New York stock exchange, or using a U.S.-based server, or even by simply trading in dollars, which is something that no large international enterprise can avoid.

In 2014, France’s leading bank, BNP-Paribas, agreed to pay a whopping fine of nearly nine billion dollars, basically for having used dollar transfers in deals with countries under U.S. sanctions. The transactions were perfectly legal under French law. But because they dealt in dollars, payments transited by way of the United States, where diligent computer experts could find the needle in the haystack.

European banks are faced with the choice between prosecution, which entails all sorts of restrictions and punishments before a verdict is reached, or else, counseled by expensive U.S. corporate lawyers, and entering into the obscure “plea bargain” culture of the U.S. judicial system, unfamiliar to Europeans. Just like the poor wretch accused of robbing a convenience store, the lawyers urge the huge European enterprises to plea guilty in order to escape much worse consequences.

Alstom, a major multinational corporation whose railroad section produces France’s high speed trains, is a jewel of French industry. In 2014, under pressure from U.S. accusations of corruption (probably bribes to officials in a few developing countries), Alstom sold off its electricity branch to General Electric.

The underlying accusation is that such alleged “corruption” by foreign firms causes U.S. firms to lose markets. That is possible, but there is no practical reciprocity here. A whole range of U.S. intelligence agencies, able to spy on everyone’s private communications, are engaged in commercial espionage around the world. As an example, the Office of Foreign Assets Control, devoted to this task, operates with 200 employees on an annual budget of over $30 million. The comparable office in Paris employs five people.

This was the situation as of last October. The latest round of sanctions can only expose European banks and enterprises to even more severe consequences, especially concerning investments in the vital Nord Stream natural gas pipeline.

This bill is just the latest in a series of U.S. legislative measures tending to break down national legal sovereignty and create a globalized jurisdiction in which anyone can sue anyone else for anything, with ultimate investigative capacity and enforcement power held by the United States.

The U.S. targets the European core countries, while its overwhelming influence in the northern rim – Poland, the Baltic States and Sweden – prevents the European Union from taking any measures (necessarily unanimous) contrary to U.S. interests.

By far the biggest catch in Uncle Sam’s financial fishing expedition is Deutsche Bank. As Pierre Lellouche warned during the final hearing of the extraterritorial hearings last October, U.S. pursuits against Deutsche Bank risk bringing down the whole European banking system. Although it had already paid hundreds of millions of dollars to the State of New York, Deutsche Bank was faced with a “fine of 14 billion dollars whereas it is worth only five and a half. … In other words, if this is carried out, we risk a domino effect, a major financial crisis in Europe.”

In short, U.S. sanctions amount to a sword of Damocles threatening the economies of the country’s main trading partners. This could be a Pyrrhic victory, or more simply, the blow that kills the goose that lays the golden eggs. But hurrah, America would be the winner in a field of ruins.

Former justice minister Elisabeth Guigou called the situation shocking, and noted that France had told the U.S. Embassy that the situation is “insupportable” and insisted that “we must be firm”.

Jacques Myard said that “American law is being used to gain markets and eliminate competitors. We should not be naïve and wake up to what is happening.”

This enquiry marked a step ahead in French awareness and resistance to a new form of “taxation without representation” exercised by the United States against its European satellites. They committee members all agreed that something must be done.

That was last October. In June, France held parliamentary elections. The commission chairman, Pierre Lellouche (Republican), the rapporteur Karine Berger (Socialist), Elisabeth Guigou (a leading Socialist) and Jacques Myard (Republican) all lost their seats to inexperienced newcomers recruited into President Emmanuel Macron’s République en marche party. The newcomers are having a hard time finding their way in parliamentary life and have no political memory, for instance of the Rapport on Extraterritoriality.

As for Macron, as minister of economics, in 2014 he went against earlier government rulings by approving the GE purchase of Alstom. He does not appear eager to do anything to anger the United States.

However, there are some things that are so blatantly unfair that they cannot go on forever.